Mahler: Symphony No.1, Honeck, Pittsburgh SO 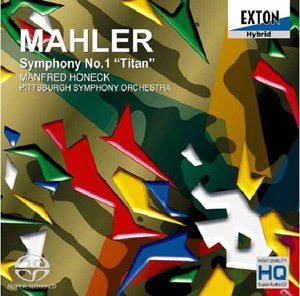 Manfred Honeck is a musician from the heart of the Viennese tradition. He took to conducting after ten years in the viola section of the Vienna Philharmonic, so when he tells American orchestras how they should be playing Mahler they listen. That authentic Viennese approach, combined with one of America’s top flight orchestras promises the best of both worlds.
Both are certainly evident, but there are limitations here too, and I wonder if Honeck is trying too hard to impress his Viennese views onto the players. The central European performing traditions are most evident in the inside movements. Honeck writes in the liner note that an important property of the second movement ländler is an emphasis on the second beat of the triple meter, which Mahler expected his players to know and therefore did not notate. Fortunately, he is not too pedantic about this; the second beats stand out in the basses at the opening, but in that and many of the following phrases, the agogic profile is smoothed out as the phrase tails off. The landler character is also emphasised through a slower tempo, and some really woody clarinet solos, all of which contributes to a pastoral, although not necessarily rustic, atmosphere. In the slow movement, Honeck emphasises the dotted downbeat rhythms, almost to the extent of suggesting double dots. This is presumably another example of Viennese flavour, but I find it a little jarring.
The outer movements are presented with focus and clarity, valuable attributes, no doubt, but the clarity often seems to be at the expense of atmosphere and drive. SACD technology poses new challenges in the opening of the work, how to appear from nothing when every minute detail is perceptible. (The SACD sound is excellent, but it is only stereo, there is no surround mix.) The assertiveness of the woodwind solos – the cuckoos and the fanfares – makes for a strident transition into the main theme, although when it arrives it is a little lacklustre. Again, this is a case of clarity of sound and texture trumping dramatic or propulsive urges.
The finale could also do with more energy and more atmosphere, more adrenalin in the rondo theme and more hushed expectation in the interludes. But again it is all about detail here, and you’ve got to admire the sheer range of articulations, dynamics and note lengths. Honeck’s control of the orchestral balance combines with the superior audio to ensure that the strings are always audible over the winds.
The orchestral playing is good, although not uniformly so. The Pittsburgh Symphony has an impressive string sound, and the players have done well to incorporate Mahler’s and Honeck’s unusual articulations – glissandos, ricochets, spiccato – seamlessly into their collective style. The woodwind function better as soloists than as an ensemble, and there some co-ordination issues in the second movement. And the brass sound isn’t to my taste at all, it is very nasal and underpowered. That’s a great shame, because a punchy brass section is the one thing an American orchestra could usually be relied on to deliver in a Mahler recording.
These things come down to taste of course, and it is interesting to speculate about whose tastes this recording is aimed to satisfy. For not only are American and Austrian parties involved, but there is also a strong Japanese contingent. The record label is Japanese, and they take pride in describing how the recording was mixed in Yokohama – there’s even a picture of the inside of the studio. Could it be that Honeck and his forces are thinking specifically of Japanese listeners when they focus obsessively on the tiny details, somehow losing the bigger picture along the way?
Gavin Dixon