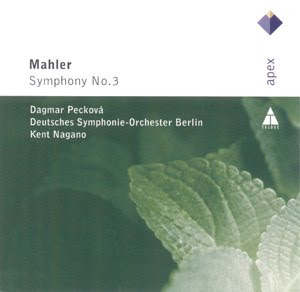 The image of mint leaves on the cover of this CD is presumably intended to imply a fresh, new recording of Mahler’s 3rd Symphony. If so, it is highly misleading, as this is a rerelease (and not the first) of a Warner recording first issued in 2000. It is not a bad reading though, and from the sound quality you could mistake it for new. I have a few reservations about the interpretation, especially in the outer movements, and would struggle to recommend the disc at its original full price, but the budget price tag of the reissue makes it an attractive prospect.
It is a live recording (aren’t they all these days), but the sound is nevertheless impressive. The acoustic of the Philharmonie in Berlin should take at least part of the credit for that. And while the tuttis are not quite as detailed as they could be, the soloists are very well served by the sound. There is not a peep from the audience (have they been remastered out?) and the applause has been removed.
My main reservation about this Mahler 3 is the lack of emotional involvement, especially in the outer movements. The first movement is a tricky one, as it is stubbornly episodic yet requires a sense of dramatic narrative to weave the short sections together. It doesn’t really get that and consequently feels a little meandering. The individual sections work well enough in isolation though: good horns at the opening, good woodwind solos, a slightly throaty but impressively strident trombone solo.
The last movement also suffers from a sense of superficiality. Tempos are on the fast side and rubato is kept to a minimum. That’s not to say that this is a mechanical reading, but rather that the various indulgences that Mahler tempts the conductor with along the way are all chastely avoided. And like the rest of the symphony, the recording of the last movement is more involving in the solos than in the tuttis.
The best of this recording is to be found in the inner movements. From the start of the second movement, it really comes alive. Those woodwind solos, the oboe and later the flute and clarinet, are magnificent, and the string sound in this second movement is warm and inviting. The third movement is imbued with all the rustic charm you could want, and the posthorn solo, played by Joachim Pliquett, is spot on: distant, yearning and militaristic all at the same time.
Dagmar Pecková is a competent rather than exceptional vocal soloist, although the success or otherwise of a Mahler 3 is never going to rest on the shoulders of the alto. Nagano returns to clear, open textures in the fourth movement, laying himself open to charges of shallowness, perhaps, but achieving a noble elegance nonetheless. And a good performance from the Knabenchor Hannover in the fifth movement, the ladies of the Rundfunkchor Berlin are a little brittle at the top, but the textures of the movement are saved by the rounder tone of the boys choir.
A recommendation then, but with the proviso that this takes into account the budget price tag. Nagano’s Mahler 3 is a revisionist exercise in some ways; as if he is trying to rescue the score from the Romantic excesses of his forbears. It is a noble effort, and the payoff is clarity of ensemble and focussed textures throughout. For me, though, it served as a reminder of how much I love all those Romantic excesses.
Gavin Dixon