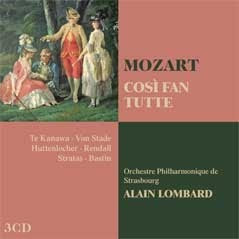 This rerelease of the 1978 Ta Kanawa/Von Stade Così Fan Tutte is welcome indeed. Theirs is a spectacular pairing, and as both are now in process of winding down their singing careers, this is a timely reminder of their former glories.
The recording has been in the catalogue long enough for virtually every kind of opinion to have been expressed about it. One criticism that is often made is that Alain Lombard is an uninspiring conductor. That is a fair point, perhaps, but he does a proficient job. His slow tempi have come in for criticism too, and it is interesting how the debate about the speeds of Mozart’s operas have moved on in the intervening years. With the speeding up in the 1980s and 1990s, to the more recent slowing down, even in period performance, this recording seems like a document from the ancient history of Mozart interpretation. In a sense, much of what has happened since is prefigured here. There can be a certain frustration at the slow tempi, yet when you try to imagine the same singers performing faster, you begin to realise that something about the music would be lost. And all the leads have the vocal support for the longer notes that the tempo creates. What’s more, each has such an interesting and elegant tone that nothing ever feels drawn out. My own view, at least as far as tempos go, is that what is presented here is ideal for a ‘Romantic’ reading of the opera, and of all Mozart’s works, this is surely the most deserving candidate for such an interpretation.
The singers seem to be sympathetic to Lombard’s smooth, lyrical approach. Much of their articulation has a fluid portamento quality, which would probably seem a bit syrupy today, but which fits ideally here. Duets and ensembles permeate the drama, and all work beautifully, thanks to the well matched cast. Te Kanawa and Von Stade match their timbres and their modest vibratos well. You sometimes get the feeling that Von Stade is pushing her voice just that little bit harder to balance with Te Kanawa, but the timbre is never adversely affected. David Rendall and Philippe Huttenlocher complement the ladies well in the male lead roles. Both have a warm, attractive vocal tone, excellent intonation and the musical ability to fit seamlessly into the ensembles. Neither has quite the star quality of the more famous soprano or mezzo, but both certainly pull their weight. Good support too from Teresa Stratas and Jules Bastin as Despina and Don Alfonso. Despina’s high jinks can seem excessive on record, where you have just the comedy voices of her alter egos and no costumes to complete the effect. Stratas doesn’t hold back; she gives a real buffo performance, which is just about within the bounds of taste. You certainly can’t ignore her.
The Orchestra Philharmonique de Strasbourg are also in 19th century mode. They play with a satisfyingly round tone, all very atmospheric. The strings are occasionally a little imprecise, in the overture for example, but otherwise they turn in a fine performance. Sound quality is good, in fact it is very good for 1977. As with the performance, the audio prioritises atmosphere over pinpoint clarity. That is more to the benefit of the ensembles than the solos, but all the voices are well represented throughout.
The packaging is a bit Spartan, you get a cast list, a list of tracks and a synopsis. Such is the way of opera reissues I suppose, but I would have liked to have read something about the history of the recording. Perhaps, in years to come, this will be elevated to the status of an iconic recording from the history of opera, and will be rereleased in an elaborate casing with copious notes detailing its entire history. In the mean time, I’m more than happy to settle for this budget-price box set.
Gavin Dixon 2010