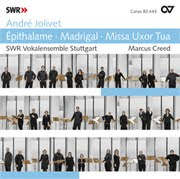 Jolivet’s choral music is a brave undertaking, even for a professional choir. His textures are always unconventional, and the only traditional elements, at least on this recording, are brief snatches of plainsong that are woven into otherwise innovative textures. Tonality has a bearing on this music, but it never determines the harmonies or progressions.
That is not to say that the music is wantonly atonal. It is French after all, and a commitment to the beauty of the human voice is a common feature of these three works. The two composers who come most readily to mind are Stravinsky and Messiaen. Jolivet strove to set his music apart from the fashions and trends of Parisian music, but he couldn’t completely distance himself from Stravinsky’s pervasive influence. But rather than follow Stravinsky’s neo-classicism, Jolivet goes back to the sounds of the Russian-era works. So there is often a raw angularity about the choral writing that calls to mind Les Noces or Zvezdoliki. Messiaen was happy to acknowledge the influence Jolivet had on his early development, although the influence is just as likely to have flown in the opposite direction in later years. Certainly, the raw sensuality of much of Messiaen’s music is reflected here, the impassioned homophonic fortissimos of the Trois petites liturgies, for example, or the elemental simplicity of line that elucidates the most complex textures in the Turangalîla-Symphonie.
The interplay of erotic and religious themes is explored in two of the works on the disc with reference to marriage. The first work, Épithalame, commemorates the composer’s 20th wedding anniversary, while the last, Missa Uxor Tua, was written for the wedding ceremony of his son. Épithalame opens with the imitation of chiming bells, but doesn’t labour the point. In fact, the invention and variety of textures throughout the disc is endlessly fascinating. Those bell chimes at the beginning, for example, develop into close harmony chords that suggest the bells’ overtones, almost a precursor of spectralism. Later the textures develop further, taking in fast scale passages, glissandos, quiet monotone successions of syllables, almost a textbook demonstration of how to create musical variety from the limited resources of an unaccompanied choir.
The other two works are accompanied, although both only employ small ensembles. Madrigal is a more substantial work than its title suggests, in three related movements. There is a hint here of serial structuring, especially in the instrumental parts, but on the whole this is music of a free and apparently intuitive atonality. But while the structural logic of the pitch content is difficult to pin down, the motivation towards clarity of line is evident throughout. The first two movements of the work are slow and quiet, while the third is a little more uptempo, but even at his quietest and most introverted, there is always a joie de vivre about Jolivet’s music, a propulsive inner life that engages the listener from beginning to end.
Missa Uxor Tua mixes the liturgy of the Catholic wedding service with that of the mass ordinary, in the process bringing together Latin and French. Gregorian chant has a presence, but like Jolivet’s use of tonality, it is by no means a controlling influence on the structure or the language of the music. Considering this is music for a wedding ceremony, much of it sounds austere. But here again, there is a deep sense of joy that underpins the music, and even when the textures take on that Symphonies of Wind Instruments homophonic angularity, there is always a sense that this formalism is just a veneer, a cooling influence to contain the mass of positive and very human emotions behind.
The SWR Vokalensemble Stuttgart and director Marcus Creed really have the measure of this music. They studiously resist the many passing temptations to lapse into a warm Romantic sound. But the clarity they maintain instead is anything but austere. It is a little distancing, perhaps, but this is clearly the composer’s intention. Jolivet is a composer who knows how to write for the voice. He knows how to challenge the singers too, although he never introduces difficulties just for their own sake. I would have liked a slightly warmer sound from the sopranos in the top register, but otherwise both the choir and the recording are ideal. And full respect to the singers for their ability to pitch this music; atonal choral music is always going to be a challenge to performers, but the SWR choir demonstrate that it need not be so for the audience.
Gavin Dixon