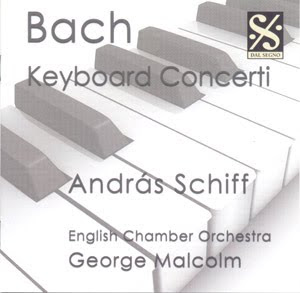 
The 1981 Gramophone review of the first release of these Bach Concertos (http://www.gramophone.net/Issue/Page/April%201981/48/777830) makes interesting reading. The reviewer (R.F. – Richard Fairman?) is listening to a brand spanking new digital recording, but pressed onto vinyl. He ensures any readers who may be timid of the new technology that ‘When you put the stylus down in the opening groove, you hear precisely nothing; normally you hear 'atmosphere', as indeed you do in an empty concert hall or studio...it is marvellous to have not a trace of distortion, a beautifully rounded tone and quite astonishing clarity.’


So how does it stand the test of time? Well, for one thing, I am surprised that this is a digital recording, the reissue sleeve notes make no mention of the fact (perhaps the Haydn is analogue), but also the sound has a warmth that I usually associate with analogue transfers. No question about the clarity though, it is a recording of pinpoint technological precision, where every line of counterpoint and every detail of instrumental balance is clearly reproduced. If this sounds like a 70s recording, it is because of the style and priorities of the sound engineering, not its quality.
András Schiff, it turns out, was a pupil of the legendary George Malcolm, so any concerns about Cold War era culture clash are easily dismissed. The close communication and musical empathy between the two men is everywhere apparent. Many readers will be familiar with Schiff’s flowing, but always disciplined, approach to Bach, and that’s the way he plays it in this early recording. And George Malcolm gets exactly the same interpretation from his orchestra; both piano and ensemble sing, with warm lyrical lines, subtle but intelligently employed rubato and the sort of variety of articulation that, if it were performed like this today, could well have the power to resuscitate the tradition of Bach on modern instruments.
So no danger of mechanical performance, and no danger Gould-like tempo extremes either. But while the performances avoid extremes, they never feel safe or middle-of-the-road. Where some period performers (and Glenn Gould) would be tempted to propel the outer movements with fast tempi, Schiff achieves an inner propulsion in the counterpoint that gives these movements all the life they need. And in the slow middle movements it is all about cantabile. The audio ensures that bass lines and counterpoints are all represented, but this music revolves around the melodic line, to spectacularly beautiful effect.
Haydn Sonatas seem like an incongruous filler, but the performances are of apiece with the Bach. Again, luminous, lyrical lines are the order of the day, and exaggerated dynamics, tempos and articulations are studiously avoided. The similarity in performance style makes the Bach seem quite Classical in retrospect. But anachronism aside, why not? Both composers benefit from interpretive rigour and pianistic virtuosity tempered by modesty. The Haydn is a generous filler too, and the overall running time exceeds 75 minutes. Anybody who is a fan of András Schiff’s piano playing should seek this out as it is a fascinating document of his early years. And for anybody who is not yet converted, this is as good a place to start as any.
Gavin Dixon