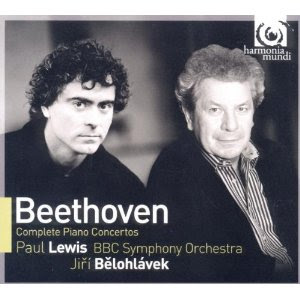 
Among the many highlights of this year’s Proms season is a complete cycle of Beethoven Piano Concertos from Paul Lewis. After the near-universal adoration that greeted his Beethoven sonata recordings, his live concerto performances are likely to be preceded by very long returns cues and followed by raptures from the arena.
This recording also promises much. Unlike the Proms performances, the recordings are made with a single orchestra, although like the live events, the recording is made with the participation of the BBC. A marketing ploy by the Beeb perhaps, getting a high-profile disc out in the weeks leading up to Paul Lewis’ Proms appearances? To be honest, I doubt it. After all, it is not like they are going to struggle to attract the crowds with this billing.
But whatever the marketing concerns, this is a very fine recording indeed. It is only a few years since Paul Lewis was known principally as a protégé of Alfred Brendel, but these performances demonstrate that he has now fully digested the influence of his mentor and become a distinctive artist in his own right. As coincidence would have it, the last high profile Beethoven Concerto cycle to appear on disc was from Brendel, accompanied by Rattle and the Vienna Phil. The expectations for that release were astronomical, leading inevitably to disappointment in some quarters.
Is Paul Lewis setting himself up for a similar reality check? I don’t think so. This is not the last word in Beethoven Piano Concertos (how could it be?) but Lewis’ playing combines open expressivity with a level-headed musicality. His performances, whether by intuition or design, are going to appeal to a very broad audience base. His is a very flowing Beethoven, which considering some of the composer’s more awkward figurations is a triumph of technique in itself. It is also the primary difference between Lewis and Brendel; both pianists make every note matter, but Lewis integrates that attention to detail into flowing, lyrical phrases in a way that Brendel would not. It’s just not as percussive as Brendel, and whereas Brendel’s recordings never let you forget the sheer mechanics of the keyboard technique, Lewis seems completely at one with his Steinway.


One cause for possible dissent is the Romanticism of Lewis’ Beethoven. These could well be described as traditional readings, and Lewis makes full use of the round tone of his modern instrument, rubato is tasteful, but there sure is a lot of it, and, as I mentioned above, lyrical passage work always takes precedence over clarity of texture or counterpoint.
Jiří Bělohlávek and the BBC SO are in many ways the ideal partners for an approach like this. Bělohlávek, a core-repertoire 19th century specialist, was a surprise choice for Chief Conductor of the BBC SO a few years ago, especially since their strengths are usually considered to lie in the modern and the obscure repertoire. But this recording demonstrates his success in bringing the ensemble up to scratch in the big name works. Like Lewis, they give a heart-on-sleeve Romantic interpretation. A studio recording seems a rare luxury these days, but the precise balance between orchestra and piano here shows what an advantage it can be. The string section is too large for my taste, and while they do very well, there are just too many of them to manage the chamber ensemble accuracy we have come to associate with this repertoire.
It seems a little churlish to complain about the lush Romantic sound, especially given the integrity of these interpretations, for which it is essential. It is more of an issue in the first two Concertos, the most resolutely Classical of the cycle, although even here the sheer commitment of the approach wins the day. And that Romanticism also brings intimacy to the quieter passages and slow movements. In fact, the ability of Lewis and Bělohlávek to create those quiet, seductive textures without losing sight of the overall architecture is a major achievement. It demonstrates that the warm, expressivity of their Beethoven is not simply regression to some old-fashioned and comfortable performance style, it is their way of creating immediacy and direct communication. This is not a recording for purists who insist on gut strings and an old Broadwood, but for everyone else it offers a near-ideal Beethoven experience.
Gavin Dixon