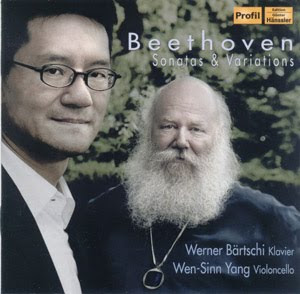 It seems an unlikely partnership, at least from the cover photograph. In fact, Werner Bärtschi and Wen-Sinn Yang regularly peform together, and both are Swiss, Bärtschi ethnically so, while Yang was born there to Taiwanese parents.
Lorin Maazel is quoted in the liner as saying of Yang: ‘At the highest technical level he plays with a wonderful, round tone and perfect intonation. His phrasing is sensitive, and he has an extraordinary grasp of the philosophical dimension of the works he plays.’
Some, but not all, of these statements are borne out by the present recording. The ‘wonderful, round tone’ is everywhere evident, and is clearly Yang’s major asset. His sense of phrasing is also impressive; early Beethoven needs subtlety in the phrasing, it needs a player with a good grasp of the musical structure, but who can make it evident without recourse to dynamic extremes or indulgent rubato. And Yang is just such a player. His Beethoven is Classical but without ever being stuffy.
The one statement by Maazel that doesn’t ring true is his commendation of Yang’s perfect intonation. The intonation here isn’t catastrophic, but it is far from ideal. Fast passage work brings out some deficiencies and so do fortissimo movement endings. That’s my only real gripe though, as I say, it is not a huge problem, but at this stage it is what distinguishes Yang from the greatest proponents of his instrument.
An ‘extraordinary grasp of the philosophical dimension of the works he plays’ is almost beside the point in the case of early Beethoven. Unless, of course, the simplicity of the interpretation and the directness of expression has been calculated to accord with the straightforwardness of the music. His is an ideal approach, in many ways, to the Variations on Handel. Like Beethoven, he strives throughout for musical variety in spite of the limited material. But it’s not much of piece really, and it is curious that it appears at the beginning rather than at the end of the programme.
The two sonatas Op.5 are more substantial works, at least in terms of duration. Again, the players strive for musical variety rather than psychological drama, and again the results seem fully accordant with the spirit of the music. The cello phrasing is slightly more emphatic here, with more hairpins and more dynamic contrast.


Werner Bärtschi is a sympathetic and lively accompanist. Not that it is all accompaniment, this is 18th century music, after all, and the keyboard has at least equal prominence to the cello, which may or may not explain why Bärtschi has a higher billing than Yang on the cover. Like Yang, Bärtschi occasionally struggles with the faster passage work, resulting in one or two slips. They’re minor flaws though, and serve more to demonstrate that this is a live recording than to ruin the overall experience.
Modest applause follows each of the works, and it certainly is modest, suggesting either a small or an unenthusiastic audience. Clearly, it takes a lot to animate the Swiss when it comes to musical prowess, because these performances deserve a better reception than that.
The recorded sound is good, as of course is the acoustic of the venue. They combine to produce a warm, rounded tone for both instruments that never compromises the detail. And Yang’s performance is well worth hearing, even if it doesn’t quite meet the standards attributed by Maazel. An enjoyable disc, but one to file under ‘promising performer’ rather than ‘benchmark recording’.
Gavin Dixon