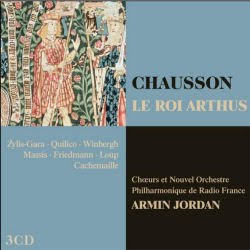 Le Roi Arthus has never quite made it into the repertoire, but is that through fault of its own or accident of history? I think a little of both. It is very difficult to assess the work on its own terms, because Chausson, like so many of his contemporaries, remains too deeply in the shadow of Wagner when it comes to operatic dramaturgy. Of course, like Beethoven before him, Wagner was admired and imitated by his successors because his work was worthy of such admiration and imitation, and even if this is a second rate knock-off of Parsifal and Tristan, that doesn’t necessarily make it redundant.
In fact, Chausson has a lighter touch than Wagner when it comes to orchestrating recitative, and his shorter timeframes mean that none of the work’s three acts outstays its welcome. The music is at its most Wagnerian at the end of act 2, which is too close to the Good Friday Music for comfort. The transcendental finale of act 3 recalls Berlioz’ Faust, and you may also hear Bizet or even Massenet elsewhere. All are fine models for operatic composition, and it would take a hard-hearted pedant to dismiss Arthus solely for lacking originality.
There is a slight lack of dramatic engagement in the music, a consequence perhaps of Chausson’s efforts to reconcile the dreamy stasis of Tristan with more conventional narrative structures. Reading the synopsis (which is included in the liner, no libretto though), the story is fascinating. It is the old love triangle between Arthur, Guinevere and Lancelot, but with plenty of wars, soothsaying, swords in lakes and whathaveyou thrown in. It is indicative, I think, that the scenes are described as ‘Tableaux’, as the mood and pace of each is completely different, and only thematic connections string the work together. That, too, is a Wagnerian trait, of course, but unlike Wagner, Chausson never quite manages the necessary immediacy, the psychological empathy required to elevate the individual moments beyond their narrative function.
The performance may have something to do with this. Two recordings of the work are currently available, and the other, which has Leon Botstein conducting the BBC SO (Telarc 80645) has been much criticised for its Romantic excess. Botstein, it seems, is reluctant to restrain the orchestra for the sake of the singers, beholden as he is to the lush instrumental textures. Listening to Armin Jordan’s performance, it is difficult to understand how these temptations could have come about. For this is a much more controlled performance; the orchestra is certainly expressive, and regularly indulges in lush, sweeping tuttis, but there is never any danger of the singers being subsumed. In fact, Jordan appears to have gone back to Chausson’s roots in song as the basis of his approach. He is aided by the studio recording environment, and there is an admirable precision about the recording levels and the general ambiance of the sound. The recording was made in 1985 and it shows its age in a certain flatness of tone, not a big problem but it would be nice to hear a bit more bloom on these lush Romantic textures.
The cast is worthy rather than exceptional. The heavy vibrato of Teresa Źylis-Gara as Genièvre and Gösta Winbergh as Lancelot is probably in keeping with the spirit of the work, but can get wearing. Gino Quilico has a more modest, almost introverted, tone as Arthus, which to my ear is much more attractive. He plays the role as if the whole story were a psychological drama focussed on the one character. That makes for some wonderfully engaging arias, although he is constantly in danger of being upstaged by his more extrovert co-leads.
If you haven’t heard this work before and you’re curious, it is not going to break the bank to get hold of this mid-price reissue. The work deserves more though; it deserves a recording by top flight Wagnerians. It deserves staging too, and despite its grandiose setting, it isn’t an impractically large work. It would be an ideal one for Wexford.
Gavin Dixon