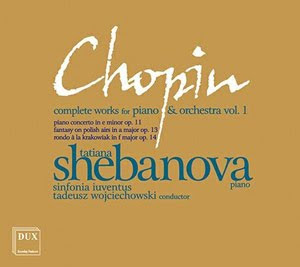 
Tatiana Shebanova's recording of Chopin's complete music for solo piano was one of the more significant contributions to the composer's discography in his bicentennial year. That was partly because of the inspired decision to present the works in opus number order, but also because Shebanova clearly has something original to say with the music. In contrast to the bombast of many of her (usually male) colleagues, Shebanova takes a measured, precise approach to Chopin. 'Refined' is a word that could apply to almost every phrase.
In the concertante works, this refinement runs the risk of sounding dispassionate. Even in these early works on volume 1, the pianist needs to inject some emotional turmoil, but that is not really the way Shebanova does things. The two shorter works on the disc, the Fantasy on Polish Airs and the Rondo à la Krakowiak, seem on first appearances to be jumping the queue, appearing as they do before rather than after the concerto. I suspect they have been placed at the start because they best suit Shebanova's approach and are the most successful performances. Even here though, the pianist's sophistication risks obliterating the fragile folk character of the Polish sources. She is at her best when playing those delicate mid to high register filigree phrases. The recorded sound of the piano isn't particularly transparent or luminous, but the register around the top of the treble clef comes across better than the rest of the range, creating brief and tantalising moments of transcendental pianism recorded with utmost clarity.
Whatever my reservations about Shebanova's approach, she deserves a better orchestra. The Polish Sinfonia Iuventus Orchestra, as the name suggests, is made up of young players. It's not a youth orchestra; they all seem to be conservatoire graduates in their 20s. Technically, the group is serviceable enough, but very little about their playing seems truly inspired. In the 1st Concerto, this workaday approach combines with the soloist's reserve to create a very dispassionate interpretation indeed. Technically, there are a few problems in the orchestra; the string ensemble has some shaky moments in the first movement and the brass struggle throughout to play as a section. But it is the lack of passion that really deflates the performance, both from the piano and the woodwind soloists.
The sound, too, is serviceable rather than exceptional. The balance between the piano and orchestra is always rigorously maintained, but there is little depth to the sound of either. As I mentioned, that mid to upper register of the piano is where the sound works best, but further down the keyboard there is a distinct lack of presence or clarity. Having heard Shebanova's solo Chopin recordings, I'm not inclined to blame her for this. In fact, I'd love the chance to hear her left hand passage work with greater clarity.
Tatiana Shebanova provides an important insight into Chopin's music through her unfashionable modesty at the keyboard. Her playing serves the music, unlike that of most of her colleagues, for whom ego often comes first. But there is a danger of her taking it too far. This is revisionist Chopin, and I'd only recommend it to those who find the bravado of the top name pianists too much to stomach.
Gavin Dixon