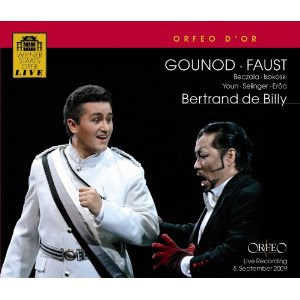 
This release presents a recording of a very fine performance indeed, but you'd expect nothing less from the Vienna State Opera. It is a house that takes great pride in its repertory system, and in many ways, this recording demonstrates just why that is such an advantage: it is very much an ensemble piece, and you really get the feeling that everybody involved knows the work and the interpretation like the backs of their hands, yet nothing feels stale or over rehearsed.
The 2008 outing for the production saw Roberto Alagna and Angela Gheorghiu take the lead roles (they were still an item at that point). They're not missed though, because Poitr Beczala and Soile Isokoski put in performances that could easily be classed in the 'A-list' category. Beczala is in real bel canto mode, with a warm, uninhibited vibrato and a warm, expansive tone. He never makes it sound easy though, especially those top Cs. All the notes are secure, but it is the kind of performance where the audience gets as much out of its empathy with the singer as with the character.
The sophistication of Soile Isokoski's tone is ideal for the role of Marguerite. The timbre of her voice is infinitely variable, yet always distinctive. She is particularly impressive in the lower register, although most of this part seems to be somewhere in the middle, and she sounds great there too.
I'm less impressed with the other male leads, Kwangchul Youn and Adrian Eröd as Méphistophélès and Valentin respectively. Neither has a particularly large voice, and Youn often seems to struggle to fill the hall with the sound of his lower notes. He is also occasionally behind the beat, not fatally so, but it stands out in this otherwise technically perfect performance.
I can't decide whether the Vienna State Opera fields a large chorus or just a very powerful one, perhaps both. But whichever way, they really make their presence felt, and even when they are at the back of the stage, the clarity of their diction makes every word audible. Impressive orchestral playing too. The orchestra is a little constrained perhaps, and while conductor Bertrand de Billy clearly gives the vocal soloists space, I get the impression that he is keeping his woodwind players on a shorter leash. All of which is probably just as it ought to be, and the strict Viennese hierarchies that keep the singers at the top of the playbills while the orchestra and choir do all the real work go unchallenged as ever.
The sound is good for a live recording. As I say, the choir have a real presence in the mix. The orchestra are well balanced, if a little emulsified, although whether that is through the microphone placement or the acoustic I couldn't say. As with most recordings from largerhouses, the singers sound clearest when they are down stage, but the difference really is minimal.
The packaging follows a modest but sophisticated design, with the Vienna State Opera's distinctive crimson appearing as a stripe across the top of the cover. There is no libretto, although of course that's the rule rather than the exception these days. The liner notes are interspersed with production stills; a nice idea but I wish they were bigger and in colour.
In general, though, this is a Faust worthy of recommendation. I guess there is no real point in lamenting the passing of the era of studio recordings of operas, that horse has long bolted. In their absence, the industry continues with live recordings, and too often that is an excuse for mediocrity. Not here though, instead we are presented with a more than acceptable audio recording of a night at the opera that makes you wish you'd been there. You can't ask for more than that.
Gavin Dixon