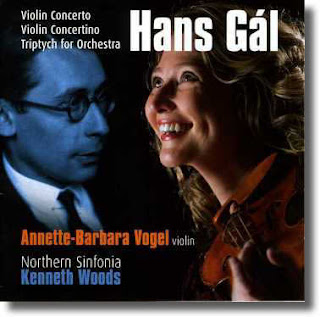 Hans Gál was one of the many composers in the 20th century for whom emigration led to posthumous neglect, both in his homeland of Austria and in his adopted Britain. A look through the discography shows that the neglect is not absolute, but it is difficult to disagree with the statements by the performers on this disc that his was a major talent that remains seriously underappreciated.
Gál’s aesthetic is inherited directly from the tail-end of the Austro-German Romantic tradition. His music bears many similarities with that of Franz Schmidt, although not the long, lyrical melodic lines that characterise so much of Schmidt’s orchestral music. Franz Schreker is another similar Viennese voice, although Gál (thankfully) avoids the excesses of Schreker’s neurotic Expressionism. In fact, it is difficult to deduce much about Gál’s personality or temperament from this music. He was presumably a very calm, centred man, for whom music came from within, rather than through conscious reactions to external stimuli. How else to explain the stylistic similarities of these three works, the Concerto written before his flight from the Nazi’s, the Concertino written in London during the war, and the Triptych written towards the end of his life, in Edinburgh in 1970.
If he has a failing, it is a lack of melodic identity. That is not necessarily a problem, but the Brahmsian dichotomy of functional thematicism vs free melodic invention is weighed heavily toward the former. Having said that, the most distinctive melody in any of these three works is the opening theme of the Concerto, which turns out to be the one subjected to the most rigorous motivic manipulation. Yet Gál wears his rigour lightly, even here, and there is a hint of the Viennese waltz tradition in all this music, especially in its ability to traverse a wide array of moods and tempi, but without ever taking itself too seriously.
The liner notes point out that differences between the Concerto and the Concertino are a matter of scale rather than of style or substance. In fact, even the scale of the two works is comparable, although the Concerto has three movements to the Concertino’s two, and the Concerto orchestra has woodwinds were the Concertino is written for strings. The woodwind soloists play important roles in the Concerto, although Gál’s incredible unity of style ensures that the fabric of the orchestral texture remains even, balanced and continuous, even when the melodic lines are being passed around the winds, or between them and the soloist.
It is interesting, although probably pointless, to speculate about the extent to which Gál’s music had integrated British styles in the forty years or so between his moving to the UK and writing his Triptych in 1970. Is that some Warlock in there? Or perhaps some Butterworth? In truth, the traditions of tonal composition in Britain and central Europe in the mid-20th century were so closely related that the Gál’s music fits seamlessly into either. And that unity of style and intent remained with the composer to the end. This is perhaps slightly less consequential music than either the Concerto of the Concertino, but the lightness of the composer’s touch combines yet again with a rock-solid compositional technique, with very listenable results. The performances and the recording are of a consistently high standard. The Northern Sinfonia does not quite have the precision of ensemble that Gál would have been able to expect in Vienna, but they are probably better than anything he ever heard in this country. But most importantly, both orchestra and conductor Kenneth Woods are sensitive to the lightness of the textures and always elegantly balance the soloist. Annette-Barbara Vogel is about the most ideal exponent a composer could hope to have. She, too, maintains that delicate balance between thematic rigour and lightness of touch, often through very gradual changes of tone colour and a coherent approach to phrasing. Her low register is particularly impressive, a rich, immediate sound, but never overpowering or unduly woody. These works all border on the textures of chamber music at times, and the intimacy that Vogel achieves brings those quiet textures up close. This is her second Hans Gál project; her first was a disc of Violin Sonatas, also on Avie (AV2182). If you’ve heard that and were impressed, and I understand most were, then buy this. You won’t be disappointed.
Gavin Dixon