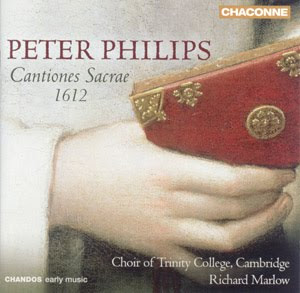 Composers who emigrate from these shores tend to end up more or less neglected in their homeland. 400 years may separate them, but the plight of Peter Philips, or rather his music, is curiously similar to that of Brian Ferneyhough. Both moved to the continent at the start of their careers, and in both cases the result was unwarranted neglect among English performers and audiences.
Aesthetic politics played an important role in both cases, and whereas Ferneyhough was moving into musical communities who were receptive to his unreconstructed Modernism, it was unapologetic Catholicism that made continental Europe an attractive proposition for Philips. But leaving aside his counter-reformationary zeal, Peter Philips seems to have been a very open-minded musician indeed. Five years separate his leaving England on pilgrimage to Rome and his finally settling in The Netherlands. They were years of travel, and the number of influences that his music displays is remarkable. Listening to the Cantiones sacrae, a set of choral works published in 1612, is like a series of meetings with the most important composers of the age. There is tenuous evidence that Philips studied with Byrd before he left England, and there are occasions here where you expect the polyphonic texture to play out as one of Byrd's strict but florid mass movements. The polychoral opulence of Tallis is reflected in many of the more grandiose textures. In terms of Roman composers, the influence of Palestrina and Victoria is also felt in these grander movements. He has also picked up Palestrina's Tridentine technique of interspersing sections of flowing counterpoint with more homophonic refrains.
If all this suggests cheap imitation, well it is difficult to class the Cantiones Sacrae with the greatest works of the aforementioned composers. Despite the cosmopolitan influences, the music maintains stylistic continuity. On the other hand, it never quite manages to be truly distinctive or memorable. Many of the phrases seem shorter than what you might find in, for example, Victoria or Tallis. This prevents the contrapuntal textures taking flight in quite the same way, but it links the structure of the music closely to the phrasing of the text, creating valuable intimacy and directness of expression.
The performance is excellent. Given that the choir is made up of undergraduates, I assume that its makeup is considerably different today than it was in 2002 when this recording was made. It has provided a springboard for at least one young singer, Andrew Tortise, listed here in the tenors but now a rising star in the opera world. The chapel of Trinity College Cambridge has the ideal acoustic, warm but never threatening the clarity of the counterpoint. Richard Marlow directs a thoroughly musical performance (it is a shame though about his smug headshot on the inside of the liner) and the, presumably editorial, dynamics and hairpins are presented with real authority, making them integral to the music.
The question of boy's vs. women's voices is acute in this repertoire. That is partly because of its vintage and the fact that choral music of the late 16th and early 17th centuries is slowly being commandeered from cathedral choirs by mixed professional ensembles. More specifically though, these five part settings are written with two soprano lines, which are all the more dominant for their independence and close harmony. Any doubters about the appropriateness of ladies voices in the context of a chapel choir should listen closely to this recording, as it is about the best advocacy they could have. The timbres mix beautifully, yet maintain the necessary independence for the polyphonic textures. Peter Philips' intention in writing two soprano lines appears to have been to create brighter, headier textures than the traditional four part choir could achieve. This choir demonstrates that ladies voices on those top lines provide the ideal medium for the composer's elegant, upbeat and always lively textures.
Gavin Dixon