Strauss: Rosenkavalier from the Salzburg Festival 2004 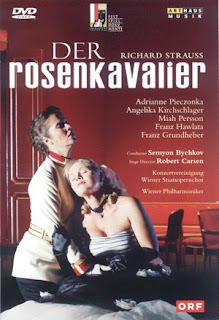 
Expectations run high for this Rosenkavelier, not least because of the involvement of Semyon Bychkov, the Vienna Philharmonic, Angelika Kirchschlager and Miah Persson. And the standard is as high as could be expected from any of these world-class Strassians. Canadian director Robert Carsen adds in a few little surprises to unsettle the Saltzburg Festival’s respectable clientele, but in general this is a solid, traditional reading, well performed and well presented on DVD.
The setting is updated slightly to late 19th/early 20th century Vienna, although with the exception of the 3rd Act Inn Scene, little of controversy is presented on the stage. But what a stage it is! Carsen has so much space to play with that he regularly divides the stage into three adjacent rooms, and even when the libretto calls for an anteroom to the Feldmarschallin’s chamber, Carsen adds on another for good measure.
Among the singers, top musical honours go to Franz Hawlata as Ochs and Miah Persson as Sophie, while dramatically, Angelika Kirchschlager puts in the most engaging performance. Hawlata is commendably repulsive as Ochs, and both monocle and wig are used to great comic effect. His voice is commanding in the baritone register, but he struggles slightly towards the bottom. That’s intentional of course, and Strauss only writes those low notes in to underline the character’s rare moments of vulnerability.
Miah Persson has the looks and the voice to play the part of Sophie. There is a directness and simplicity about her tone which is always attractive, and which is particularly impressive in the higher register, where her security and fluency really stand out, even in this impressive cast. Kirchschlager takes the part of Octavian to extremes, and worries little about continuity of character in the various cross-dressing transformations. But that doesn’t matter a bit, because she controls the stage in each of her guises. This is an opera filled with strong characters, but Kirchschlager makes sure that Octavian remains the focal point of the tale.
Adrianne Pieczonka is a little more stiff as the Feldmarschallin. She is always graceful though, and her tone is full of Straussian colour. Her tone is occasionally thin at the very top, but her tuning is never in question. The opening scene is enriched musically by the complementary timbres of Pieczonka and Kirchschlager, which never risk emulsifying Strauss’ often complex ensemble textures.
Semyon Bychkov delivers the kind of spectacular Strauss interpretation for which he is rightly famous. He has a rare skill in the orchestra pit of being able to keep tight control of both the singers and the players all the time, yet without imposing any apparent restraint on either. The Vienna Philharmonic don’t play with quite the unity that they might when on stage, but this too is to Bychkov’s credit, as he really gets the players to relax into the music. So without the visuals, you might be slightly (and I mean slightly) disappointed by the absence of that superprecise VPO sound, but in the context of this production, the easy Viennese charm with which they present the various woodwind solos, or strike up waltzes, is more than enough to win the day.
The video direction by Brian Large involves a number of moving cameras and some editing between close-ups of singers, but it is all done with discretion and never feels excessive. The exceptionally wide stage means that we occasionally watch scenes in one corner, but are only aware of the fact because all the voices are concentrated on one channel of the stereo array. That can be slightly jarring, but only if you haven’t been paying attention. The sound is good, but is much better down stage than up, a consequence, presumably of live recording.
So, all in all, a solid, traditional and well performed staging, with lavish production values and no real surprises...or so the audience thinks at the end of the first half. At the start of Act 3 things change significantly, as Robert Carsen transforms the ‘Inn’ into a seedy red-light district brothel. The visual innuendos that the setting allows are fully commensurate with the libretto, and you get the feeling that the shock value of the idea has missed its mark. On the other hand, the Salzburg Festival caters for a slightly more aristocratic demographic than the home DVD market, so perhaps it had its effect live. The only sticking point between Hofmannsthal’s inn and Carsen’s bordello (apart from its occasionally being described as the former) is the reaction of the police, who seem disproportionately concerned about the Baron’s vices considering the other goings on in the establishment.
In fact, the seediness of this scene is ideal. For despite the palatial surroundings of the rest of the opera, it is after all a work about sexual deviancy, about infidelity, cradle snatching, cross dressing, polygamy...the list goes on. These may be aristocratic circles, but Carsen does the work a service by peeking behind the veneer of decency and showing us how this society really works.
Gavin Dixon