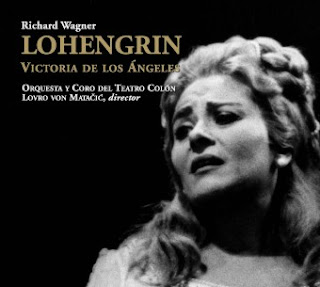 
Arriving just a few weeks after the grand reopening of the renovated Teatro Colón in Buenos Aires, this recording is a timely reminder of the stellar operatic performances the venue has hosted in its long history.
Given that the name of the lead soprano appears in larger lettering than that of the composer on the cover, it is safe to assume that the target audience for this remaster are the still loyal devotees of the late, great Victoria de Los Ángeles. They won't be disappointed – she puts in a classic bel canto Elsa – but there is plenty more of interest here. The cast is uniformly strong (why is it so difficult to muster the necessary talent today?) and there is a palpable sense of drama in every bar.
If, like me, you are wary of ancient opera reissues because of the sound quality, then I can offer a cautious reassurance that the recorded sound is unlikely to ruin the enjoyment. An apologetic note appears at the end of the libretto (yes, there's a libretto I'm pleased to report)saying that the disc was mastered from a 'non-professional' recording. A bootleg then? Whichever way, the apology is unnecessary as the sound is perfectly adequate for most of the music. There are far better early 60s opera recordings out there, and this doesn't come close to what Decca were managing at Bayreuth at the time, but it's still not bad. The tuttis can be muddy, and the choir, who I assume are usually at the back of the stage, are indistinct, but the quieter scenes, the duets and the quasi-recitatives, all come across with an engaging sense of intimacy. If that has been achieved through digital remastering then I'm impressed. The mix is quite bassy, another product perhaps of artistic licence at the mastering stage. There is one bass frequency that finds a sympathetic resonance from somewhere and blasts out every time the cellos hit it, but it's a distraction rather than an annoyance.
Victoria de los Ángeles brings a real star quality to the part of Eva. Technically, I can't fault her singing, but I would say that some listeners today are likely to find it old fashioned. She is not averse to exaggerating Wagner's hairpins and often adds huge swells to her longer notes at the top. She is refreshingly modest with her vibrato, it's there all right, but it's not the first thing you notice. I'm not sure if it is the recorded sound, but her tone is quite narrow and direct. That gives her voice all the projection and presence the role requires, especially in such a dramatic production, but if I'm honest, I'd rather hear rounded tones in the top register.


Another interesting name on the cast list is Christa Ludwig as Ortrud. She, too, brings an impressive star quality to the role. She has a wider vibrato, although still well within the bounds of taste. It is a wonderfully menacing performance, helped, I think, by the fact that the recorded sound is sympathetic to her rich lower register. The pasted on maniacal laughs don't do much for me though, another element of Wagnerian performance practise that has thankfully since been lost in the mists of time.
The men in the cast: Franz Crass, Fritz Uhl and Carlos Alexander all put in strong performances too. Again, all are in classic bel canto mode, which can sound a little too Mediterranean for Wagner, but he would surely have appreciated the passion and projection that this performance tradition brings to his music.
It is something of a macaronic performance, as the leads sing in German while the choir sings in Italian. Why? Tradition I guess. It is something that Victoria herself felt obliged to apologise for, saying 'Don't worry. They do this in many theatres. This doesn't stop the Colón from being great.' In fact, the choir are so poorly served by the recorded sound that you can't make out their words anyway, but the libretto is given in the languages used, which can be quite disorientating.
I've one last grumble, and it is about the brass section of the orchestra. They really are dire. The trumpets in particular split just about everything, which is a real shame considering their prominence in the work. The rest of the orchestra does better, and conductor Lovro von Matačić allows the woodwind soloists plenty of space, while still keeping the ensemble tightly coordinated. All the set pieces – the procession to the cathedral, the prelude to act 3 – have impressive dramatic intensity, although, as I say, these louder sections are where the recorded sound really begins to detract.
Essentially, this recording is a historical document, but it would be a great shame if it was treated only as that, as there is much in it to enjoy. Performance traditions of Wagner have certainly moved on in the intervening years, but listening to it you might well find yourself pining for the old days. You'd be unlikely to find a professional production of a Wagner opera today with such a poor brass section, but then, you'd also be unlikely to find one with such a uniformly proficient cast. And all that Latin passion really adds something special to Wagner's already passionate music. They don't make them like they used to.
Gavin Dixon