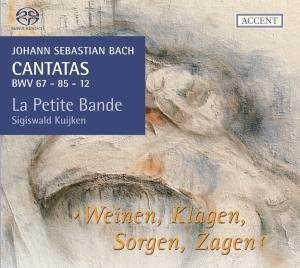 Oh dear. Sigiswald Kuijken appears to have taken a wrong turn on the latest leg of his Bach cantata pilgrimage. Listeners, like myself, who warm to Kuijken's relaxed, period performance approach, are going to get a shock when they put this disc on. The opening chorus of "Halt im Gedächnis" BWV 67 is a car crash of epic proportions. The main culprits, I think, are the strings, whose tuning is at about junior school orchestra standard. The winds aren't as bad, but they are close.
Somehow, the vocal soloists manage to hold it together over all this, but later on in the cantata they too come to grief. Things settle down a bit in the middle movements, but then the strings come to the fore again, in the penultimate movement, the aria "Friede sei mit euch", and we are right back to square one.
So what's going on here? This is only the second instalment of the cycle I have heard, but the ensemble managed to keep it together in volume 10. In fact, in that previous release, Kuijken was able to turn the ensemble problems to his advantage, creating a sense of informality, which to my ears is the ideal counter to the almost clinical precision of the Suzuki cycle, which we should probably consider the main competition. But in volume 11 things go from bad to worse. The string section is slightly larger, which may be part of the problem. The majority of the orchestral players have been replaced between the two volumes, suggesting that La Petite Band has become something of scratch orchestra. That sort of approach is all right if you can maintain the standards, but you have to question the wisdom of it when it leads to such a variance between consecutive releases in a single cycle.
To be fair, the second and third cantatas on the disc BWV 85 and 12 escape the worst of these problems, although they never completely disappear. It is an unfortunate consequence of the liturgical calendar approach that Kuijken is obliged to place BWV 67 first, in any other context there would be the option of salting it away at the end, or even omitting it altogether.
There are a few highlights in the second and third cantatas that are worthy of mention. The second aria of BWV 85 "Jesus ist ein guter Hirt" features Kuijken on cello da spalla as the obbligato. He is a big advocate of the shoulder cello, so it is interesting to hear him perform on it. Sadly, again, there are tuning problems throughout, which could be attributed to the physical problems of playing a cello under your chin, were it not for Dmitry Badiarov's note perfect performances on the instrument in the Suzuki cycle. Some nice baroque trumpet from Jean-François Madeuf (whose name has acquired a hyphen since vol.10) in BWV 12. His nasal reedy tone is ideal for Kuijken's intimate, chamber music approach, although he too is dogged by intonation problems.
I remain a fan of Kuijken's Bach, and of his laid back leadership, but this disc demonstrates the dangers of the approach. Once was the time that the use of period instruments excused problems of intonation and even of ensemble, but not anymore. In fairness, every Bach cantata cycle has its less successful moments; the sheer quantity of music tests the rehearsal capacity of even the hardest working ensembles. I'm still looking forward to the last ten volumes of this edition. Kuijken and his ever-changing forces have had a bad couple of days in front of the microphones, but they are certainly capable of far better things than this.
Gavin Dixon