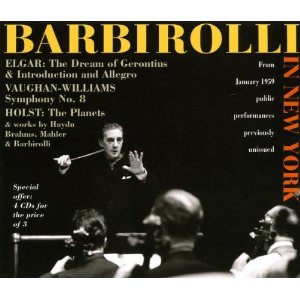 A fascinating historical document this, but there is also much music making here that is well worth hearing in its own right. It is not a reissue as such, given that the recordings have (inexplicably) never been issued. The sources are tapes of radio broadcasts made in New York at the start of 1959. Neither the history of the tapes nor the processes involved in the remastering are laid out in the liner, but the sound quality is in the good to moderate category. Of the eight pieces presented, at least three are given in performances that easily transcend the limitations of the technology, and in the Gerontius in particular it is easy to forget all about crackle and limited band width.
Barbirolli's month in New York in January 1959 was a poignant episode in the later years of his career. He had formerly been the principle conductor of the New York Philharmonic for seven years in the 30s and 40s, so his brief stint with them some 15 years later brought back emotional memories for everybody involved. Even the hard-nosed New York critics recognised a return to the top quality music making that had previously been the norm under Barbirolli's baton. For his return visit, he stuck to what he knew best, and the programmes were dominated by 20th century British music.
And what astonishing results! The highpoint of this set is a Gerontius which is up there with the best of them. Richard Lewis would go on to be one of the most acclaimed Gerontiuses of his generation, and this early recording shows that he had the measure of the part from the very start. And Barbirolli knows just how to get the NYPO strings to play Elgar. (Critics at the time noted the sophistication that had returned to the NYPO string sound with Barbirolli, but sadly the sound quality makes that difficult to assess.) The Westminster Choir, don't quite live up to their name; you can tell that the American singers are struggling to emulate the British choral sound. But on the whole this is a Gerontius to cherish, and as I say, one that has qualities that far transcend the limitation of the sound.
The other two excellent performances are of movements from The Planets and of Vaughan Williams' Eight. Again, Barbirolli is able to make the most of both worlds, combining his own deep knowledge of the repertoire with the unparalleled professionalism of the ensemble. The Vaughan Williams has a sense of energy and inner life that is all too rare in more sedate recent recordings. The sound quality becomes an issue in the louder passages of The Planets, but on the whole this too is a recording that is well worth hearing, despite the limitations of the audio. Saturn and Neptune are missing, and my first thought was that the restoration engineer had met his Waterloo with crackly old tapes of quiet music that he had failed to extricate from the noise. But no, it turns out that Barbirolli omitted these movements from the performance, and in hindsight it seems he knew what he was doing; at least one reviewer commented on the work that it was far too long, so imagine if they'd heard the whole thing.
The other works are more of historical interest, but are interesting all the same. Barbirolli's Mahler 1 is good, but it is no surprise that it has disappeared off the radar, considering the far superior quality of Bruno Walter's studio recording with the same forces the following year. Both Haydn 88 and Barbirolli's own transcription of movements from the Fitzwilliam Virginal Book show their age in terms of performance practice. We are in Stokowski territory here. I understand that sort of thing is gaining a new audience, but I can't say it is to my taste. The Brahms Violin Concerto and the Elgar Introduction and Allegro are primarily of interest because of the identities of the violinists, the former played by Berl Senofsky, his NYPO debut, and the latter with a string quartet led by John Corigliano, then leader of the orchestra but now better known as the father of the composer who shares his name.
This purchase is a must for Barbirolli fans, as much for the Gerontius as anything else. The front of the box says that the four CDs are selling for the price of three. That's a reasonable offer, but to my ear there is at least a CD's worth of redundant material here; the Brahms, the Haydn and possible the Mahler could be omitted without reducing the artistic, or even the historical, value of the result. The sound, as I say, is fair to middling, and there is more crackle on the last disc than on the other three. Most of the biggest climaxes disappear into the mirk, but the fact that neither Elgar nor Vaughan Williams are overly affected by this just goes to demonstrate the tasteful modesty of their orchestration. The blessings of both of those composers on the conductor's interpretations, combined with the justified reputation of the orchestra ought to be all the recommendation that this set needs.
Gavin Dixon