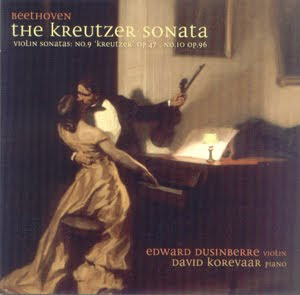 
This is a great recording, and I've no hesitation in recommending it warmly. Beethoven's Violin Sonatas have been cursed in recent years with more than their share of mediocre recordings, but this certainly is not one them. The performance is excellent, both technically precise and interpretively insightful, and the recording quality is the best you'll find anywhere short of SACD.
Edward Dusinberre is the leader of the Takács Quartet, and while his colleagues are no doubt in a similar league, this solo outing demonstrates just why that group has the superlative reputation it does. His playing here is varied, richly felt, emotive, expansive...there is really very little you could want from him that he does not do at some point on the disc. Given the recent trend for period performance recordings of Beethoven's chamber music, it is probably worth pointing out that this is in a more traditional vein. It's Romantic Beethoven, which some may object to in principle, especially for the middle period Kreutzer, but Dusinberre is not arguing a case here, rather he is demonstrating the validity of his interpretation, and few could argue with the results.
I love the way that both players are able to continually come up with surprises, especially in such well known works. Take, for example, the transition from the introduction to the exposition about a minute and a half into the first movement of the Kreutzer. The introduction itself is performed with such precise, studied control that it lulls you into thinking the whole movement is going to continue at that pace. But then the main theme just erupts out on nowhere, bringing with it that sense bubbling energy and ebullient joy. There is no trickery going on here, and nothing is really added that is not already in the music, but the players are able to demonstrate that beneath Beethoven's imposing furrowed-brow reputation of genius, his greatest music is founded on simple pleasures.
The 10th Sonata Op.96 is a similar case. If anything, this performance is even more direct and unaffected. It is a more straightforward work, I think, so this approach is entirely appropriate. But here again the players are able to take even the most seasoned (and cynical?) listener by surprise. The coda of the first movement has a short figure repeated over and over until a final iteration at a louder dynamic. When that last one comes, it is as if the players themselves have been taken by surprise. But don't take that for naivety; there are plenty of episodes which have clearly been meticulously prepared, with the dynamics and phrasing articulating impressively large-scale thinking. The development of the first movement of the Kreutzer is all based on long crescendos and diminuendos, with various permutations of the main theme going on over the top. The players achieve an impressive juggling act in maintaining the drama of the former while laying out the almost mathematical logic of the latter.
The sound quality is excellent throughout, the robustness of the violin tone elegantly matched by the similarly imposing piano sound. There is a real immediacy to the sound, which really benefits both players. The varied timbres and dynamics of the piano are particularly impressive, especially in combination with the finely judged balance, which allows all that piano detail to act as a backdrop to the violin without ever threatening to overpower.
Are Dusinberre and Korevaar planning a full Beethoven Sonata cycle? Let's hope so, because if they can maintain this phenomenal standard, it could easily become the benchmark for a generation to come.
Gavin Dixon