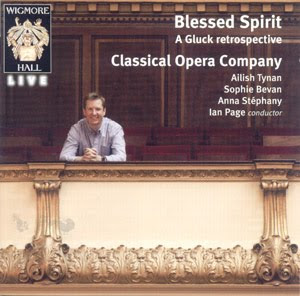 
Given his pivotal role in the history of opera, it is curious how little we hear of Gluck's music in UK opera houses. The reason may be the imbalance in the popularity of his individual works: Orfeo and Alceste have been done to death (although I've never had the chance to see either) while the rest of the composer's voluminous output remains effectively unknown.
On the strength of this selection of arias, there is much in Gluck's lesser known works that deserves to see the light of day. Extracting the numbers from the operas themselves has the fortunate result of liberating the music from the classical subjects of Gluck's operas, eliminating the first of the possible turn-offs. Another potential turn-off is the prospect of amateur performance. With the exception of a few high notes in the soprano lines, and perhaps some balance issues between soloist and woodwind obbligato, there are few technical challenges. But this highly proficient and highly professional performance demonstrates just how much is lost if these works are consigned to amateurs.
The three singers, Sophie Bevan, Ailish Tynan and Anna Stéphany, each bring a distinctive tone to the proceedings. Bevan has a clear, focussed sound, with a narrow and impeccably controlled vibrato. Tynan's voice is richer, warm and sophisticated with some elegant colours in the lower register. But for my money, Anna Stéphany is the star of the lineup. There is a real immediacy about her singing, and a level of drama that seems wholly unaffected by the concert setting or the bleeding chunks programme. She too has a narrow vibrato, which gives her voice the required penetration when her mezzo line runs below the violins. You wouldn't mistake her for a man, but there is a manliness to her tone, which helps make the trouser roles more credible. And in the guise of Orfeo, her impassioned 'Che faro senza Euridice?' is the highlight of the programme.
The orchestra of the Classical Opera Company is the Orchestra of the Age of Enlightenment in all but name. No surprise, then, that they are able to combine sensitivity to historical performance issues with real immediacy and expression. There is nothing dry or academic about this historically informed performance, and the Enlightenment values of beauty of tone and clarity of line are evident throughout. To my ear, the major benefit of period instruments in the late 18th century repertoire is the distinctiveness of the woodwind timbres. Anthony Robson demonstrates here just how much the classical oboe can bring to Gluck. The way he matches the timbre and emotion, not to mention phrase shaping, of the singers in his obbligato lines is wonderful, and always ensuring never to overpower or upstage.
The choice of three female singers may seem like overkill, but the distinctiveness of each of the voices, and the variety of the material (which apart from anything else combines Italian and French) ensure that monotony is never a concern. Also, I like the way that the programme has been devised not to imitate an operatic context. By presenting soprano and mezzo arias, it is as if Ian Page is focussing on one aspect of Gluck's art, a survey of his writing for a particular voice type. Gluck's writing certainly has the variety to stand such an approach.
As with all the Wigmore Hall Live releases to date, the sound here is excellent. On previous recordings, I have had the impression that the sound has been engineered to include the hall's famously bright acoustic, as if it were an issue of corporate identity. Not here though, the sound is bright, but the recording does not emphasise the resonance.
All in all, this is a tantalising taster of Gluck's art. In fairness, I could imagine productions of these operas getting bogged down in the classical conventions of their plots and subjects. But as concert material these arias, recitatives and ensembles have much to offer, and are performed with enough dramatic insight that the absence of staging or narrative context is never felt. The Wigmore Live label has yet again achieved its aim: it has produced a document of a performance to make you wish you'd been there.
Gavin Dixon