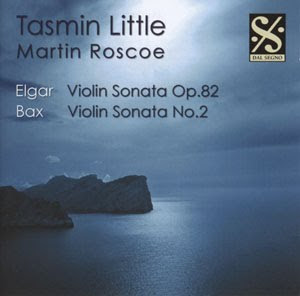 
These two violin sonatas are already well represented on disc, surprisingly so in the case of the Bax, but these budget reissues are very welcome nonetheless. Tasmin Little has made the British violin music of the first half of the 20th century her speciality, and her stylistic sensitivity to the work of both composers is a real asset. I have to say that I don't think the Bax is the equal of the Elgar, but in a sense that doesn't matter, because the players present the two works as stylistically distinct. To make some crude generalisations, the Elgar is in an Expressionistic vein, while the Bax is more of an Impressionist work. And the players emphasise the contrast, injecting passion and drama into the Elgar, but then settling into more relaxed tone painting in the Bax.
There is an incredible variety to Little's timbres and textures in the Elgar. This may be a late work, but it retains that distinctively Elgarian trait of continuously transforming from one mood to another through subtle harmonic and textural shifts. Little is the ideal guide through the complex psychology. And when Elgar takes repose in occasional extended passages of plaintive simplicity, neither player stands in his way. Such passages are only transitory, of course, and when the return to more impassioned writing comes, the playing immediately picks up the drama again, and without missing a step.
In fact, the precision of these performances is remarkable. It is not the most technically demanding music in the world, but both are impassioned works, and for many players, too much involvement in the emotional side of things can lead to technical slips. Not here though. The level headedness of both players is an important part of the success of the readings, plus their ability to retain that control without the results sounding dry or lifeless.
The Bax may not have the dramatic breadth of the Elgar but it is still an emotive and deeply Romantic work. Much of the violin writing is in the lower register, and Tasmin Little draws some rich sonorities from the G string. And like the Elgar, there are regular changes of mood and character, but here the piano is usually expected to lead the way or to introduce the slight changes of figuration that move the music into its next phase. Martin Roscoe is quite demure at the piano; he never forces any of these changes or makes any effort to wrest the limelight from the soloist; the ideal accompanist you might say. He is also quite far back in the sound array, giving the piano a rounded, homogeneous sound.
To be honest, I'd like to hear a little more definition from the piano, but apart from that the sound quality here is perfectly acceptable. As ever with these budget reissues, you're looking for a bargain when with the performance, but not expecting too much from the recording or the packaging. That's pretty much what you get here. In fact, Dal Segno offer more than many of their competitors in terms of booklet info; they tell you where and when it was recorded for example.
If your a Bax fan and don't already have this recording, it is worth looking out for. If your not, then the Elgar is likely to be the main attraction, and I'm happy to report that in this recording it is very attractive indeed. In other hands, Elgar's Sonata can sound like salon music. No fear of that from Little and Roscoe. Their reading is impassioned and intense, but also perfectly controlled and structured. Just as Elgar would have liked it I suspect.
Gavin Dixon