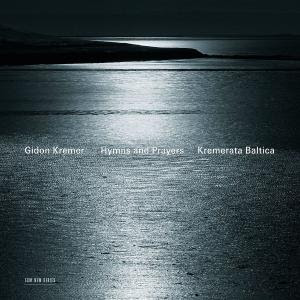 
The care with which ECM fosters and develops its identity is extraordinary. Every disc they release fits neatly into their brand in terms of packaging, artists and repertoire, and yet each also subtly expands that identity, and usually in ways that are very difficult to pin down.
This is one of those discs where the whole concept is derived from the company's collaboration with a single performing artist, in this case Gidon Kremer. But plenty of Kremer's recordings for other labels would sit uneasily in the ECM roster, his Piazzolla recordings for example, or his Mozart Concertos. But he is also in touch with a great deal of the ambient new music coming out of Eastern Europe, the ECM core repertoire.
Both the choice of repertoire here, and the order of the programme, are inspired. The first composer, Stevan Kovacs Tickmayer, is new to me and probably to most listeners. Just as well then, that the Gidon Kremer's name adorns the cover, as I'm sure there are many out there like myself who are willing to trust the violinist about the talents of whatever new composer he has unearthed. And this piece is great. The Eight Hymns are dedicated to the memory of Andrei Tarkovsky, and it would be difficult to think of a more appropriate memorial to the director. The mood is subdued and the dominant sonorities are isolated vibraphone notes and pianissimo violin harmonics. The whole piece takes you into the dreamlike world of The Mirror or Solaris, and as in Tarkovsky's greatest work, the piece, calm as it is, invokes a range of images and sensations, with which the sounds themselves then interact. Everything hovers around the boundary between the real and the imagined, and without the music ever making that distinction emphatic. Needless to say, it's an instant ECM classic.
Curiously, the most radical programming choice on the disc is the Piano Quintet by César Franck. Again, context is all, and this really is not the sort of work you would expect to find on an 'ECM New Series' disc slotted between two Eastern European religious minimalists. But the biggest surprise of all is that it really fits. Like Tickmayer and Kancheli, Franck is able to relax into ambient and introverted textures, without any apparent need for structural or psychological justification. Listen, for example to the piano episodes in the introduction to the first movement, completely stalling the momentum of the expositionary string phrases. The liner notes suggest the influence of Wagner as the source for this transcendence of functional form, but I'm more inclined to hear it as a product of this particular performance, and possibly of the context in which it is presented. The recording was made live at the Pfarrkircke St. Nicholas as part of Kremer's Lockenhaus Festival in 2008. The marble lined, Rococo venue gives a bright, but not overly resonant acoustic, which really favours the piano, giving its sound a sparkle and bounce. And the players give it everything, taking the dynamics down to nothing in the quieter passages, but then really laying into the tuttis. Kremer prefers to work with young musicians, and this Franck performance demonstrates exactly why. It has freshness and vitality, unencumbered by expectations of sophistication or restraint. It won't be to everybody's taste, but as the pivotal work in this programme it is an inspired choice, and is performed to exactly compliment the minimalism that surrounds it.
Kancheli's Silent Prayer is a curiosity to say the least. It is a long work with a sectional structure, held together with some very simple thematic ideas, most notably an ascending and descending major scale. Given that this is a fairly recent work (2007), I'm surprised by the apparently polemic use of tonality. Tonality underpins all the harmonies, even when they extend into the harmonics or are adorned with clusters. There is nothing wrong with that of course, but what are we to make of the continuously repeating major scale runs? Surely tonality has long been reclaimed by Kancheli and his colleges. Perhaps there is influence here from Western minimalism, from Glass, Cage or even Andriessen. Certainly, some of the more energetic passages suggest the driving repetitive figures of Andriessen, while the more contemplative passages often call to mind Cage's music for string quartet. Whatever the answer, this is a fascinating piece. Its form and direction are inscrutable, but would be all the more frustrating for being easily comprehended.
It is interesting to compare the recent careers of Kremer, Kancheli and ECM. All have distinctive artistic identities that fit well with each other but that are all equally at home in a range of other contexts. And all are happy to continue experimenting, tweaking what they do, adding new elements, throwing in curve balls. They all surely have many more artistic triumphs ahead of them, and so long as they all continue to produce work at this high level of quality and imagination, long may they continue – together and apart.
Gavin Dixon