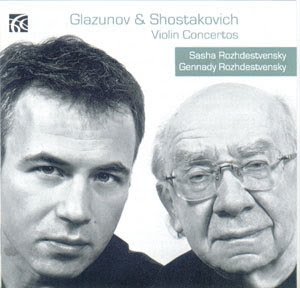 
Glazunov and Shostakovich – you'd expect the real thing from the Rozhdestvensky family, and they don't disappoint. These are real Russian interpretations, gritty and energetic but also infused with poetry and with plenty of light and shade.
Gennady Rozhdestvensky is undoubtedly one of the greatest conductors of his generation, but his greatest achievements have always been with orchestras and soloists with whom he has worked closely for years. What better scenario, then, than an orchestra he founded and his own son as violin soloist. The greatest strength of these interpretations is their coherency, the fact that every player is clearly working towards a common goal. The fact they are all Russian helps, and that Russian quality of string playing is common to soloist and orchestra.
But Sasha Rozhdestvensky is not a stereotypically Russian violinist. His bowing is certainly definite, and when needs must, he is more than happy to really lay into the string. But in general, his sound combines that slightly grainy tactile quality associated with Russian string playing with a much lighter touch, and as I say, an impressive array of dynamics and timbres. Other top name violinists might be a little more lyrical and nimble, and I do occasionally miss that, but that is not really the way they do things in Russia. There are also one or two moments of slight insecurity in Rozhdestvensky's passage work, but they are not a big deal, and the performances are good as you'll find anywhere.
Putting the Glazunov ahead of the Shostakovich is curious move. Surely the Shostakovich is the more famous, and (dare I say) the better work. There is an interesting episode in the coda of the Glazunov, where the orchestra strikes up what sounds like a military march. At the time (1904), Mahler was about the only composer introducing such external material into his work, and when Shostakovich does so a few decades later, Mahler's legacy is what initially springs to mind. But perhaps Glazunov deserves some credit too, and perhaps the programme for this disc has been arranged to draw attention to the fact.
If you haven't heard of the State Symphony Cappella of Russia, you may have heard of them under one of their previous names. In Soviet times, they were recording for Melodiya under the name The USSR Ministry of Culture Symphony Orchestra. Since then, they have made a number of appearances on Chandos as The Russian State Symphony Orchestra. That Russian habit of continual renaming is a real shame, as this is a great orchestra with an enviable tradition of Shostakovich interpretation. Of course, you can tell that just by listening to this disc however much confusion you may be suffering about who you are listening to.
The sound is good, with the soloist particularly well presented: he is clear and crisp throughout. The lower end of the orchestra loses out in the mix, which is a problem in the Shostakovich. The lower strings need more presence to achieve the required menace in the opening, and the bass clarinet at the start of the second movement sounds very distant indeed.
But in general, this is a fine recording, and the Shostakovich in particular really shines when presented in a performance of this standard. I can't help the feeling that the Glazunov is less deserving of the attentions of such fine musicians, but I know there are many who would disagree with me on that. On the strength of this outing the Rozhdestvensky father and son pairing makes a formidable musical team. Here's hoping that many more Russian violin concerto recordings are to follow.
Gavin Dixon