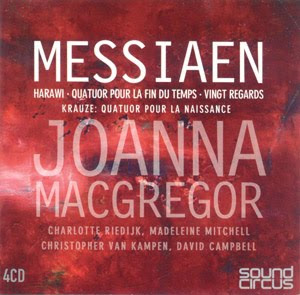 
My guess is that if you're considering this purchase you already own a recording of at least one of these works, and it is probably the Quartet for the End of Time. Don't let that put you off, because the Quartet recording here is well worth having, even if you do own one or more already. The other works are similarly well performed and recorded, and it is a box set that should appeal to Messiaen aficionados and newcomers in equal measure.
With the exception of Harawi, which is a new(er) recording, all of these discs are reissues from the 1990s. Joanna MacGregor is good at making the most of business opportunities when they come up, and so far as I can tell, the Quartet and Vingt regards originally appeared on the now defunct Collins Classics. In the mean time, MacGregor founded her own independent label Sound Circus, which just in the last year or so has been taken on by Warner Classics and Jazz. MacGregor is clearly something of a catch, even for a mutli-national like WCJ, and they are making a big deal out of the collaboration with her, not only releasing a number of new albums (the Live from Beunos Aires disc is great) but also licensing and reissuing pretty much the whole of her back catalogue.
And it is a welcome reminder of just what a great recording artist she is, not to mention advocate of new music. The performance standards here are consistently high, and even though the Quartet and Vingt regards are already represented by burgeoning discographies, both recordings on this compilation are pretty close to the top of the heap.
It often seems with recordings of the Quartet for the End of Time that one of the players, usually the clarinettist or the cellist is out to make the work into a solo vehicle for themselves. That approach can make individual movements excel, but usually to the detriment of the whole. Well, there is none of that here; it is very much an ensemble approach. The Quartet and Vingt regards were both recorded at Snape Maltings, which is the ideal acoustical environment for Messiaen's glassy yet resonant textures. The sound is perhaps a little distant, in other recordings you often get the feeling of being in amongst the players, but the sound coheres better with slightly distant microphones, increasing that sense of communal endeavour. The first disc concludes with Zygmunt Krauze's Quatour pour la Naissance, a pleasant and strongly Gallic work for the same forces. It sits uneasily in this compilation though, not just because it is not by Messiaen, but also because the composer has obviously tried, and to a large extent succeeded, in freeing himself from Messiaen's influence. It is an interlude as much as anything else, a respite from the deep psychological and theological explorations of the other works.
MacGregor's reading of Vingt regards is up there with the best of them. She has a real feeling for the changing colours and harmonic densities of the work. Her performance of the quieter movements is the best I've heard anywhere. However, since the first release of this recording, another has come along, the one by Pierre-Laurent Aimard, which has significantly raised the game and pushed all of its predecessors, this included, aside. Aimard too manages to convey all those glassy sonorities and all of the quieter passages of refracted lyricism. But he also has the hammer-like intensity required for the louder passages and, most crucially of all, the ability to gradually increase the dynamics as he builds up to those shattering climaxes. MacGregor also does this well, just not quite as well. However, it is a close thing. Both pianists are well served by excellent sound, and both are worthy of recommendation.
Harawi is a more esoteric repertoire choice, although it fits well into this programme. Incidentally, the works all date from the war years, and the discs are numbered in chronological order. That has the dual advantage of allowing the listener to follow Messiaen's development through these productive years, and also means that the most popular piece comes first. Harawi is actually much closer to the Turangalîla-Symphonie than it is to the Quartet or Vingt regards, but like the other works on this compilation, its primary distinguishing feature is the sheer variety of piano textures. So, here again we have glassy static chords, nervous fractured textures and unexpected consonant sonorities appearing seemingly from nowhere. Messiaen's writing for the voice is, I think, underappreciated, especially in the UK where the art of song has long been denigrated as inferior to other genres. Listening to Charlotte Riedijk, you could swear that she is born and bred French, such is her mastery of the language. The clarity of her diction is a valuable asset, as is the sheer power of her tone. She can be a little shrill in the upper register, but it is not like you are going to be putting this on as background music is it?
All round, then a warm recommendation, and as I say, to Messiaen enthusiasts and first timers alike. Each of these works is already well served in the catalogues, but Joanna MacGregor amply demonstrates just why this music is worthy of that level of exposure. If you search hard enough, and are willing to pay the extra, there are slightly superior recordings of these works available individually elsewhere, but for the budget price tag on this box you can't go wrong.
Gavin Dixon