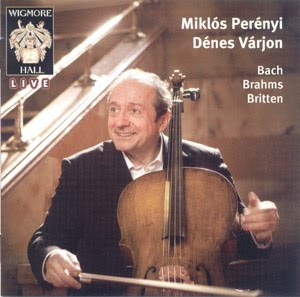 
Miklós Perényi is a scandalously underrated cellist. The sheer diversity of his art, as represented on this CD, is breathtaking. There is a rare humanity about his playing that comes in part from the fragility of his tone. He is not the sort sort of cellist to paint his phrases in broad strokes, preferring instead a delicate, studied tone. That is not to say that he lacks power, both the Britten and the Brahms have sections of real intensity, but even here the cello tone in infused with a sense intimacy.
On first hearing this disc, I was convinced that there were tuning issues, especially in the Bach. But listening more closely, that isn't the case at all. It is rather that Perényi introduces such inflection into his playing: the leading notes always hanker to resolve, transitional keys are always entirely provisional, and quiet codas feel so belated you feel like the movement is already a distant memory before it even ends. And all of this is expressed purely through the timbre of the cello; an incredible skill, and probably unmatched by any living cellist.
As with all the releases in the Wigmore Hall Live series, this is first and foremost a document of a live event. The hall's trademark resonant acoustic is as much a star as the performers, and you can't help feeling an empathy with the receptive audience as they applause enthusiastically at the end of each work.
The Bach Third Suite is given an idiosyncratic reading; a full set of the suites played like this would probably be a feel a bit too subjective, but as a concert opener it is ideal. There are important aspects of this music that Perényi clearly expresses, yet without any exaggeration. Bach's various two-part textures, for example, where the cello plays phrases and responses consecutively in different registers. These are given a real conversational feel, but the subtlety of the approach comes through in the fact that Perényi does not sound explicitly like two separate players, but then neither does he sound like one. Rather he maintains that ambiguity, finally bringing the voices together at the cadence with consummate skill. In the final Gigue he really gives the music a rustic feel, more regional colour than Bach would have liked perhaps, but a rousing and invigorating conclusion nonetheless.
The Britten Sonata is something of a rarity. It was written for Rostropovich, but I'd imagine Slava doing something very different with it. Again, that very human fragility of Perényi's tone is a real asset, especially when supported by the security of his technique. For me, the most magical moment of this performance is the pianissimo coda to the last movement, right up at the top of the cello's artificial harmonics. He doesn't make it sound easy, it is pained, intense playing. It is another case of the music sounding vulnerable, but on close listening turning out the be note perfect.
The Brahms is an intense work, too intense perhaps for Perényi's style. His is a lighter reading than many. There's no harm in that I suppose, and there is never any problem with the balance between the instruments. (A good performance from fellow Hungarian Dénes Várjon, by the way, but he is a modest accompanist, and like all good accompanists, never steals the limelight.) The Brahms is well structured, and all those build-ups to climaxes are well paced. The climaxes themselves aren't exactly earth shattering – this is chamber music played as chamber music – but in the intimacy of the Wigmore Hall, anything more would seem excessive.
The Wigmore Hall Live label has done it again: they have produced a recording of a live event that makes you really wish you'd been there. Of course, if you have been to a recital at the venue in the past, you'll know exactly what the atmosphere is like. That atmosphere is elegantly captured, at least in part thanks to the way the acoustic is represented. You'll kick yourself for having missed it, but this is the next best thing.
Gavin Dixon