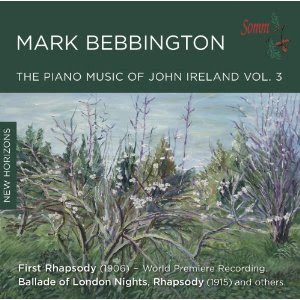 
For many formerly aspiring, but now lapsed piano students, John Ireland's name is synonymous with a certain genre of piece that seems to appear intermittently on the Associated Board syllabus, the sort of music that is easier to play than it sounds, but that includes short knotty passages that, try as you might, prove impossible to master.
I almost feel a sense of guilt towards this music, thinking back to the abuses it suffered under my unskilled fingers. Mark Bebbington, by contrast, has exorcised those demons of youth, and come up with four volumes of exquisitely performed Ireland piano works. No doubt he was a more gifted and more studious pupil than myself, so perhaps there never were any horrors here for him. Certainly, the greatest strength of his interpretations is the fact that he feels no compunction to make the music sound any more sophisticated or complex than it actually is.


The musical variety here is limited, but the technical accomplishment of the compositions is unquestionable. Ireland seems to have worked out the kind of music that suited him and stuck to it without feeling (or perhaps actively resisting) urges to explore some of the more adventurous techniques that even some of his compatriots were introducing. That said, there are clear influences here. You can't mistake the Englishness of this music, despite the composer's name, but French voices often bubble up close to the surface, and in particular those of Debussy and Ravel.
As befits the Debussian mood, Bebbington often allows himself the occasional indulgence in his phrasing, introducing pronounced rubato and dynamic shaping. Now I come to think back, much of this is stipulated in the music, at least in the Associated Board editions, but it still takes interpretive confidence and insight to create a coherent performance with this level of give and take.
'The Holy Boy' from the Four Preludes and 'April' from the Two Pieces are the works that suffered my abuses, all those years ago. In retrospect, I wish I had had a recording like this to guide me as I struggled to interpret them. The Four Preludes in particular really are easy works, to play if not to interpret, and I think my efforts to master one of them was for a grade 4 exam. If you were to look at the dots before considering this purchase, you might well consider the notes-per-pound ratio to make the price tag unreasonable. But if you don't do that, and forget all about piano exams, you'll get on fine with it. As I say, Bebbinton does not try and make anything sound more clever than it is. Instead, he finds the mood that each of these character pieces inhabits, and makes sure his performance of each is infused with it throughout. That can have the effect of stressing the pastoral side of the music, but he is always tasteful and never goes into full cow-pat territory.
The final work on the disc 'First Rhapsody' from 1906 is probably the most interesting. This is, apparently, the première recording, although in all honesty my first reaction on reading that was surprise that all the other works had previously been committed to vinyl or CD. But the First Rhapsody stands out as much as anything because for its ambition. At twelve and a half minutes it is the longest work on the disc. It also has the fullest textures, with wide ranging left hand arpeggios underpinning the long phrases. Debussy is still apparent as an influence, but Rachmaninov is also suggested. Bebbington's discipline is perhaps a little excessive here, if the piece were by Rachmaninov, he would surely have put more passion into it. Otherwise it is a fine performance, and a valuable addition to the Ireland discography.
Gavin Dixon