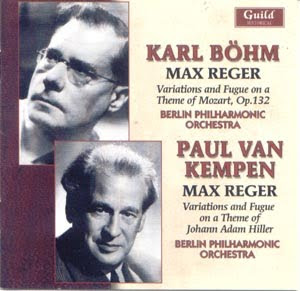 
It must be the devil's own work trying sell recordings of Reger's music in the UK. Guild are to be congratulated then for the bravery of this enterprise, but also on the quality of their archive finds. The two recordings are taken from vinyl in the collection of the Max-Reger-Institut in Karlsruhe. Their absence from the digital transfer market is probably understandable, at least in the UK, given the continuing resistance here to his music. But they are well worth a listen. With both recordings you really get the feeling that you are in the presence of the real thing. Both conductors were Reger devotees, and the Berlin Philharmonic has, of at least had in the 1950s, an unbroken tradition of performing the two works that stretched right back to the composer's lifetime when their conductor Nikisch was one of his most ardent champions.
Of the many criticisms that are regularly levelled against Reger's music, the most cutting and probably the most valid is that he struggled to write memorable tunes. This may explain his fondness for extended variation sets based on other people's melodies. These two works are the best known examples, and they demonstrate the elevated status that the composer achieved for the otherwise lowly genre. Despite his lack of melodic invention, his ability to manipulate melody is unparalleled. In each work, the theme is always there in spirit, but only rarely appears on the surface. Reger's orchestral textures are thick, but the combination of precisely articulated orchestral performance and the superior audio engineering ensures that very little is lost. He was a great contrapuntalist too, and you don't have to wait for the final fugue of either work to hear some exceptionally intricate and elegant counterpoint.
This may be sacrilege, but to my ear van Kempen has the edge over Böhm. Both are able to maintain tight ensemble (even by BPO standards) without constraining the various solos and contrapuntal lines. But there is just a bit more energy to van Kempen's Hiller Variations than there is to Böhm's Mozart. Listen, for example to the 3rd Variation of the Hiller. The energy and drive here are excellent. And then comparing the two final fugues, van Kempen is the conductor who best manages to shape that gradual increase in intensity as solo theme expands into full orchestral interplay.
But both are great performances. There is a tendency with more recent recordings of Reger's orchestral music to lay off the drama, to make it all sound like civilised salon music. Not here though. True, Reger's moments of dramatic intensity tend to be fleeting, but all are given their due by both conductors.
Audio-wise, you can't expect miracles from recordings made in the mid 50s, but German recordings from that period tend to have the edge over most others, and these aren't bad at all. There is no peak distortion, the quiet passages (mostly woodwind solos) are clear enough to be enjoyable, and the range of dynamics in between is plenty wide enough for Reger's purposes.
What you'll find on this disc may not be sufficient to convert you to Reger's cause, but if you already know these works, then these recordings offer a fascinating perspective. Historically, they are about half way between the composer's own time and ours. Artistically, though, they are as close to the composer's musical world as you are likely to find at this level of audio quality.
Gavin Dixon