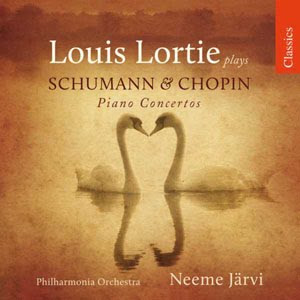 
Try as I might, I cannot think of a single thing to say against this recording. Both works have left giant footprints on the catalogues throughout the history of sound recording, but rarely has either sounded as convincing or as passionate as here.
Everybody seems to have been in the right place at the right time, which in this context is the church of St Jude-on-the-Hill in Hampstead Garden Suburb in 1991. The acoustic is warm, occasionally blending the piano notes in Chopin's faster runs, but I've no complaints about that. The technical end is a family affair, the producer Brian Couzens the sound engineer Ralph, and the mix they produce hasn't dated a bit. Ok, it does not have the pinpoint precision of more recent SACD releases, but that would surely be inappropriate in works that cry out for atmosphere and aural coherence. The greatest test, perhaps of the audio is the various woodwind obbligato solos that accompany the piano (or visa versa) in the Schumann. All are cleanly articulated by the audio, not to mention immaculately played by the Philharmonia principals.
Louis Lortie knows just how to gauge the 'Romantic' dimension of these works. Both scores are filled with tempo indications, all of which are followed to the letter, yet without the results ever sounding pedantic. The Schuman is, at least in my opinion the greater work, and Lortie takes every opportunity it offers to instil deep psychology into its performance. The strident opening is as forthright as you could want, but all that initial confidence gives way in the second subject, where both composer and performer get on with the real job in hand: the heart-on-sleeve Romantic melodies. The central slow movements of both concertos are pretty insubstantial when you look at the scores, and it is to the credit of everyone involved that the direct simplicity of these movements is never compromised by over interpretation.
The Philharmonia are on top form, and Neeme Järvi manages to both energise the orchestra and keep them in exact interpretive sympathy with the piano. As I mentioned above, the woodwind solos in the Schumann really are something special; each is played with an apparent freedom, but which never compromises the ensemble with the piano, and each has a distinctive colour and character. Ideal.
The Chopin concertos can suffer when great pianists are teamed with disinterested of underqualified orchestras (and I suspect that many of the criticisms of Chopin's orchestration over the years have been the result of such arrangements). But there are no such concerns here. Balance between soloist and orchestra is maintained beautifully throughout. More importantly, though, the orchestra play their tuttis and accompaniments as if the music actually matters. So there is humour here, and occasional sarcasm. When Chopin writes quasi-military music, the belligerence of the orchestra suggests (rightly I think) ironic or at least undecided intent on the part of the composer.
Don't be put off by the necking swans on the cover. They are representative to the extent that these are 'Romantic' interpretations in the sense that I'd have no qualms in giving this as a Valentine's gift. But there is much more to them than that. The readings are also Romantic in the way that the term could be applied to Beethoven of Brahms: melodic and approachable yes, but with a world of complex, gritty emotion churning away underneath. If your undecided about either of these works (and I had my reservations about the Chopin) then this is the recording to convince you.
Gavin Dixon