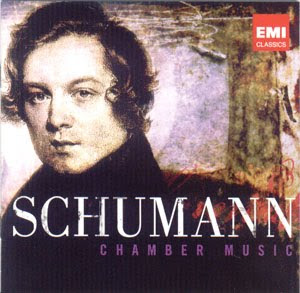 Buy from:
My guess is that anybody contemplating this purchase is more likely to be doing so to fill gaps in their Schumann collection than out of admiration for the work of the various artists featured. With that in mind, a more comprehensive survey would surely serve them better. Why, for example is only one of the Violin Sonatas (the 2nd) included and only the first two of the piano trios? And why is so much space given over to such trivial items as the Op.102 '5 Stücke im Volkston' or the 'Märchenbilder' Op.113?

As with many of the recent EMI reissue box-sets, the performers here form two distinct groups: the big names like Argerich and Gutman, usually performing live, and younger ensembles, captured either right at the start of their careers or soon after their signing to EMI. Unless you are reviewing the discs (!) you are unlikely to be listening to them all in one sitting, so the issues of interpretive, acoustical and technological inconsistency are unlikely to jar for you as much as they have for me. In fairness though, these recordings only span eight years, from 1989 to 1996, and the only real disjunction in the sound quality is between the studio and the live recordings.

The Piano Quintet is given a serviceable enough reading by Christian Zacharias and the Cherubini-Quartett. Personally, I like performances of chamber music with piano where the pianist strives for balance and ensemble, which is just what we have here. More senior pianists have a tendency of insisting that they are always right at the front of the texture and that the strings act as accompaniment, whatever the music looks like. But Zacharias has the humility to present the work as true chamber music. Some of the more dramatic passages, like the openings of the outer movements for example, could do with a little more fire, but there is plenty of energy here, and good ensemble in the strings. All in all, it's a good opener.

The String Quartets, which are also played by the Cherubinis, are less impressive. There are tuning problems right from the beginning of no.1, and all hope of that just being a shaky start to an otherwise worthwhile reading are soon dispelled. The 2nd is the worst of them, with both the ensemble and the tuning regularly going astray. The reason? Who knows. The ensemble demonstrate in the Piano Quintet that they are capable of better things. It is surprising too that EMI couldn't find a better recording of these works in their archives.
Skipping to disc 5, we find the equally youthful Grieg Trio in far better form in the 1st and 2nd Piano Trios. Theirs is a different Schumann in many ways; their phrasing and rubato are more indulgent, and their ornaments are more florid. The sound favours the violin and piano right hand over the cello and piano bass lines, but otherwise these are very fine recordings. The 1st Piano Trio in particular poses a series of interpretive issues, particularly in the way that the music suddenly changes tempo or dynamic between sections, but the Grieg Trio take all this in there stride and make it all work. For me they are the highlight of the set, but what happened to Piano Trio no.3?

Most of the other works involve more senior players, and Martha Argerich is a significant and valuable presence in most of them. She is not in the Piano Quartet Op.47 though, the pianist here being Alexandre Rabinovitch. However, with Nobuko Imai on viola and Natalia Gutman on cello there is no shortage of celebrity talent. It is bit lacklustre this one, and I couldn't help the feeling that it would be a more exciting performance had Argerich been involved. She joins a similar lineup for the Andante and Variations Op.46, the one work in this set that really deserves the status of neglected masterpiece. The instrumental requirements have no doubt contributed to its absence from the concert hall, requiring as it does two pianos, two cellos and horn. It is a wonderful and satisfyingly wayward piece though, and well worth a listen.

Most of the rest of the running time is given over to works for solo instrument and piano. Among the pianists, Argerich makes the greatest impression (no surprise there) while the top soloist title should probably be awarded jointly to violist Nobuko Imai and horn player Marie-Luis Neunecker. The latter has incredible presence, even in the five instrument Andante and Variations, and brings a real German horn sound, both to that work and to the Adagio and Allegro Op.70.

In sum, this is yet another mixed bag of a reissue from EMI. The inconsistency of recording technology and interpretation is not as acute as in some of their recent box sets, but it is still the case that the composer himself is the only significant thread that runs through the five discs. Her name is not given much prominence in the packaging, but the star performer is Martha Argerich, who seems wholly incapable of creating anything mediocre. Part of her secret is working with top name performers, people like Natalia Gutman or Mischa Maisky, who would be unlikely to engage in chamber music projects for anybody else.

Seeing that this release is largely an exercise in repackaging, the packaging itself deserves attention, and I have to say I find it wanting. The info in the liner is adequate enough, and Nicholas Marston is given plenty of space to fill us in on the context in his specially commissioned essay. But the box itself is dreadful. It is one of those double CD jewel cases that has been adapted for five discs. It is ugly, difficult to use and exceedingly fragile. So how about a move to card boxes with individual slip cases like Hyperion box sets? That would be far more elegant, easier to use, and would take up significantly less shelf space.