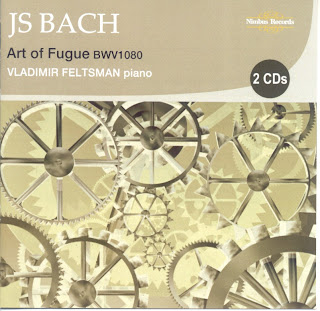 
Very Russian Bach, this. The touch is firm and deliberate throughout, the interpretation is lively but founded on a strong intellectual basis, and the structure of each movement is articulated through slow dynamic changes and long, interconnected phrases that imbue an almost narrative quality.
Vladimir Feltsman arrived in America from Russia in 1987, bringing with him a lifetime’s experience of playing Bach the Russian way, a way that soon found him admiring American audiences. This recording was made in New York in 1996 and is one of a series of classical and jazz recordings from the MusicMasters back catalogue currently being re-released by Nimbus.
The series also includes Feltsman’s Goldberg Variations, a recording which caused some controversy on its initial release for the liberties he had taken with the score. His Art of Fugue is less contentious in that respect, but it’s still the sort of recording that could get period performance types hot under the collar. It is performed on a grand piano in a generous acoustic, no effort is made to imitate the performance practice of the 18th century harpsichord (apart from the occasional hesitation before accented downbeats), and a strong sense of internal drama and turmoil is injected into many of the more expansive contrapuncti.
Given that this is an idiosyncratic performance of Bach for American audiences, comparisons with Glenn Gould seem appropriate. Like Gould, Feltsman often starts from an emotional ground zero by presenting the fugue theme quiet, straight and drained of all colour. The opening of Contrapunctus 1 is a case in point, pianissimo with even, light articulation. But the way that this, and indeed all the movements, unfolds is quite different to Gould. It’s certainly lyrical, but there is little in the way of rubato and the counterpoint is played evenly, each entry left to speak for itself. It’s intelligently structured like Gould, and achieves a similar unity of intent across the span of each of the movements. But there’s no angst, none of that eternal questing for Bach’s inner truth that makes Glenn Gould’s recordings so infuriatingly addictive. Feltsman is a man at peace with the music, he has established a coherent interpretation, which he offers without any apparent distress on his own part. It’s not that the performance is uncommitted of dispassionate; rather it is the product of a much more comfortable (and probably healthier) relationship between performer and composer.
The articulation of the counterpoint is exemplary throughout. Feltsman achieves variety through a number of technical means, but his articulation stays more-or-less even. It is a controlled, even semi-legato, which allows the voice leading to shine through any texture or dynamic. That Russian sense of deliberate, focussed interpretation does not mean heavy handed performance. So, for example, Contrapuncti 7 and 9 have a fleet footed delicacy, again with that even touch and strong sense of purpose, but neither of these weigh the music down.
One or two movements find Feltsman in a more contemplative mood, such as Contrapunctus 17a. The discipline is still there in the articulation and even dynamics, but we are at a slow, slow pace and with a slight wayward touch added by the irregular trills in each of the voices.
Ornamentation is also restrained. The Contrapunctus no. 6 is an interesting case, in that Bach designates it as being in a ‘Stile francese’. Feltsman adds a few brief ornaments, but it’s hardly rococo. And the ornaments he adds are played so deliberately that they seem integral to the contrapuntal texture rather than decorative flourishes. The opening of the Contrapunctus no. 6 is quite a heavy chordal affair, and Feltsman’s restraint is again notable in the way he communicates this sense of weight without even the suggestion of bombast.
A quotation from Feltsman in the liner gives the impression that he treats this work as some kind of holy text. ‘Art of Fugue is scripture, and as such is open ended. As all scriptures, it is pointing towards one source – the source of all from where it came and an expression of which it is.’ This may help explain his reverential approach to interpreting the work and it raises expectations of what he might do with the final Contrapunctus no.18. Well, and sorry for giving the end away, he treats the ending of the movement, as it tails off into incompletion as something far more definite that it actually is. The movement up until this point is performed in a contemplative, if disciplined, mezzo piano. The final BACH exposition, in contrast, is presented as if it were a conclusive statement of authorship. It’s one way to end the work, but I can’t help the feeling that it compromises its intrinsic open-endedness.
The two keyboard arrangement of the Contrapunctus 13, with Feltsman multitracking the two parts, completes the second disc. It’s another sprightly, if very deliberate interpretation. There is also some subtle rubato, which must have made the synching interesting.
As re-releases go, this is a curious choice from a transatlantic back catalogue. But Vladimir Feltsman has plenty to say with the Art of Fugue. Perhaps British audiences are now ready to hear resolutely inauthentic (of at least un-‘Authentic’) Bach interpretation without the automatic criticism that would have greeted it in 1996. It’s not the last word on the Art of Fugue, by any means, but its combination of intellect, discipline and emotion feels true to the spirit of Bach’s often nebulous intentions.
Gavin Dixon