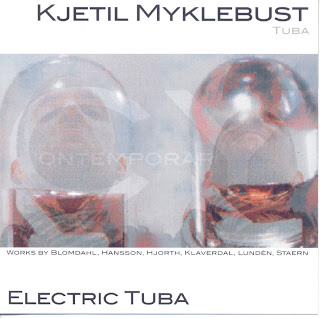 Buy/Download from:
Is electronica an underground culture in Sweden? The diversity of music on this disc suggests it isn’t a ‘school’ in the traditional sense. However, the project has been funded, or at least underwritten, by the Swedish National Council for Cultural Affairs, suggesting some institutional support for experimental music in Northern climes.

The disc in the brainchild of tubist Kjetil Myklebust, who made contact with the composers while studying in Malmö. The configuration of tuba and electronics is different in each piece, ranging from the instrument as concerto soloist in Benjamin Staern’s Endast luft och brus to absent provider of samples for Mattias Hansson’s Enter the Tuba. But the use of extended performance techniques (singing into the instrument, tongue clicks etc.) in every work suggests a close collaboration between player and composers.

It’s an interesting instrument for electronic manipulation. You’ve got some deep pedal notes, from which you can derive spectral effects, as in the Benjamin Staern, or percussive interference beat patterns, as in Stefan Klaverdal’s I heard behind me a loud voice. (The mid-range of the instrument – i.e. the range it would use in the orchestra – is almost entirely absent from these works.) Then you’ve got the very highest notes, which on the evidence of these recordings, are neither lyrical nor focussed. HiLoFi by Tony Blomdahl uses the high register extensively, as does Trubba by Ida Lundén. The sound in both cases is strained and wheezy, exactly the effect both composers are after I suspect, and one that compliments their various electronic manipulations. It is difficult to tell what tuba Myklebust plays, but from a corner of it that is shown in one of the liner photos, it seems to be a rotary valve Bb instrument i.e. a very big tuba indeed, and not the sort you would expect to hear pleasant high notes from.

All of the works are of the short, experimental type. So there is a lot of timbral exploration, usually only one or two musical ideas per work, and little structural thinking beyond the gradual transformation of individual timbres. HiLoFi by Tony Blomdahl gets the programme off to an abrasive start, a round tuba pedal underpinning some white noise type higher register effects. Lo-fi is treated as a virtue here, lots of dirty, industrial sounds and grating, saw tooth textures.

Endast luft och brus (Only air and noise) by Benjamin Staern is a more sophisticated affair. It is a study towards a concerto for tuba, live electronics and orchestra. The high glissandos in the electronic hark back to Darmstadt, while the gradually evolving textures demonstrate more sophisticated technological resources. This piece works, better than any other on the disc in my opinion, because it retains the identity and almost physical presence of the tuba. One of the most interesting effects comes from Myklebust growling and singing into the tuba and varying the pitch to created interference patterns. This is then taken up by the electronics and manipulated further – an example of ‘kontakte’ even Stockhausen would have been proud of.

Trubba by Ida Lundén is less ambitious. It is based on repeated note patterns on the tuba multitracked to create phase differences. Enter the tuba by Mattias Hansson is the only work on the disc to be based purely on samples i.e. to not present any semblance of live performance. Perhaps for this reason, the tuba is all but unrecognisable, which is a shame, even if it does give the composer the freedom to create some fascinating aural landscapes, scuttling textures and visceral effects.

Prim by Daniel Hjorth uses repeated note patterns from the tuba, manipulated to sound almost like a didgeridoo, and populating an asymmetrical rhythmic structure based on prime numbers. The agogic structure is articulated by various forms and levels of attack by the tuba, while the musical interest is maintained through gradually evolving sound envelopes. The notion of mediated live performance is given an interesting twist by Hjorth, who specifies that when the work is performed live, the tuba should use a silent brass practice mute. That is a fairly recent piece of technology in itself, and offers the intriguing possibility of seeing the tuba being played on the stage, while the sound it makes is completely subject to electronic manipulation.

I heard behind me a loud voice by Stefan Klaverdal crosses over into the realm of dance music, with heavy bass, repetitive beats and trancey treble effects. Speaking in purely ideological terms, I’m very pleased that the worlds of art electronica and dance music are finding common ground: it can only be of benefit to both. However, the quantity of tuba in this work is considerably less than elsewhere on the disc. I’ve nothing against the Lemonjelly backing effects, but why not create them from manipulated tuba sounds?

This is certainly a varied disc, and one that approaches the idea of ‘electric tuba’ from a satisfyingly diverse array of musical angles. It’s more for electronica fans than tuba fans I’d say, and most of the projects are too experimental to be considered consummate or lasting contributions to the repertoire. But one or two works have real potential, the Daniel Hjorth and the Benjamin Staern in particular. The latter, as I mentioned, is a preparatory study for a concerto, and that could be the piece that really puts the electric tuba on the map.