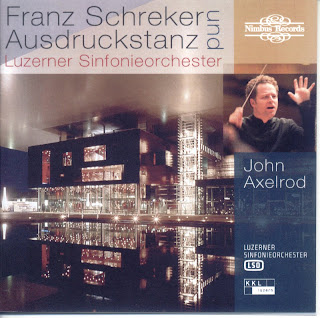 These short ballet works really bring out the best in Franz Schreker. They demonstrate his natural ability to make music fit stage action, with various narrative or pictorial allusions but nothing so concrete that you feel the need of a synopsis. And his orchestration is both masterly and imaginative; quieter textures predominate, and the originality of his tone combinations in the various small ensembles is continually fascinating.
Ausdruckstanz was a dance form developed in the first decade of the 20th century in Vienna, its rebellion against ballet conventions making it a sort of choreographic equivalent of Jugendstil. All the works presented here are associated with the Wiesenthal sisters, pioneers of the form. But, as I say, the value of the music transcends its origins, its focus on flowing rhythm characterises it as music for dance, but its musical originality, variety and craftsmanship dispel any notions of mere accompaniment.
Considering the radical times in which these works were written, they must inevitably be considered conservative. Melody is the motivating force, and without the philosophical baggage of his weightier operatic projects, Schreker shows himself to be a master of light Viennese melodic tradition. By comparison, the orchestration is more daring, his prominent use of celesta in the opening of the Valse Lente, for example, or his luscious pianissimo textures in the Die Rose movement of Der Geburstag der Infantin, which are only a short step from the expressionism of early Schoenberg. Der Wind is scored for a group of five players, but the imaginative use of each of the instruments – the piano in particular – means that it approaches the timbral variety of the preceding orchestral works. The final piece, Ein Tanzspiel, is surprisingly based on baroque dance forms. It isn’t really ‘neo’ anything though, rather the composer turning his craft to another utilitarian project for the stage and coming up again with music that is distinctively Schreker.
Good performances from the Lucerne Symphony Orchestra and their American conductor John Axelrod. The music needs space to ebb and flow, and Axelrod is obviously confident enough in his players to hold a watching brief without too many insistent downbeats. For their part, the orchestra really get into the music’s fluid style, their performance by turns lyrical and dramatic, and always expertly coordinated. There are the occasional moments when other conductors would be inclined to drive the music on to create headier climaxes, but Axelrod’s priorities are more in colour and mood, and he makes a compelling case for his interpretation.
This is apparently the first time that these works have been brought together and recorded as a sequence. In one sense that is a shame; this is music that really needs to be interpreted and I’d love the chance to compare this reading with those of other performers. But this is clearly a step in the right direction. It is a must-have for Schreker fans and yet another striking demonstration of why his neglect in the English-speaking world is so thoroughly unjustified.
Gavin Dixon