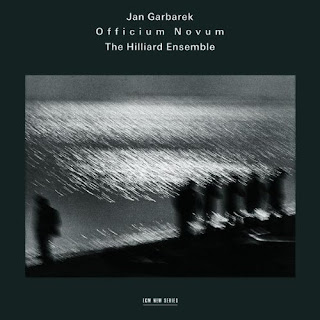 This new ECM release oozes sophistication and class, which given that it is both a crossover album and a sequel is quite an achievement. It is the third collaboration between renaissance specialists The Hilliard Ensemble and Norwegian saxophonist Jan Garbarek. Their first, 'Officium' of 1994 was a runaway hit, while their second 'Mnemosyne' applied the sax and choir concept to more esoteric repertoire. As the title suggests, 'Officium Novum' is a return to the more accessible sounds of the first album, with liturgical polyphony overlaid with sax improvisation.


East meets West is the concept behind the album, so as well as Pérotin and Spanish folk-song we also get Arvo Pärt, Komitas and Byzantine chant. These additions to the repertoire align the concept even more closely to the core ECM ethos, and you'll find plenty of both Pärt and Komitas elsewhere in the company's catalogue.


To be honest, though, the choice of choral repertoire is largely irrelevant to this concept. Jan Garbarek is the star of the show, a fact emphasised both by the proportion of running time he spends playing (about 95% at a conservative estimate) and his positioning in the recording environment. The recording venue is a Benedictine monastery up in the Austrian Alps. The chapel acoustic adds a lush layer of resonance to the sax sound. It's a clean reverb, and it doesn't really get in the way. But way does it mean? I suspect the idea is to create a subconscious sense of sacred meets profane, with the ungodly saxophone elevated through the acoustical environment of the church. When I hear this, my thoughts turn to A Touch of Frost, with David Jason lurking around in the shadows. That's an unfortunate connection, but it's one that's difficult to shake off.


The performances are to the high standards that you'd expect from both choir and soloist. There is an impressive range of sax sounds, and I'm particularly impressed by his seemingly infinite gradation of articulations. By comparison, the choir sound quite neutral. That's the idea I guess, but it strikes me as a bit of a waste of talent, especially from a group who don't even break into a sweat with Gesualdo.


The packaging is as elegant as any from ECM, its visual theme courtesy of the high contrast night-time landscape photography of the late Mario Giacomelli. Unusually though, the information inside is difficult to interpret. The playlist takes two pages, which are separated by two other pages containing a photograph and the performer credits. There are no track numbers on the playlist, so you end up counting your way through all the names to work out where you are. And the recording location is given as Propostei St. Gerold, by which I assume they mean Propstei St. Gerold. Minor quibbles only, but they stand out from the ECM label's usual flawless perfectionism.


No doubt this disc is going to sell like hotcakes. There are probably many copies of 'Officium' out there that have been spun on a regular (probably late-night) basis for the last 16 years. This follow-up does everything a sequel should do. It is very much in the spirit of its predecessor, and while it adds a few more ideas in, it never strays far from the original concept. If your primary interests are renaissance polyphony or the superior skills of the Hilliard Ensemble, give this one a miss. On the other hand, if you are on the lookout for some imaginative sax playing, some intelligent ambient music, or simply the latest musical adventure with Jan Garbarek, go for it.
Gavin Dixon