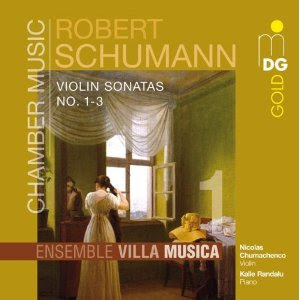 
Nicolas Chumachenco and Kalle Randalu make a convincing case for a group of Schumann's chamber works that are all too often overlooked. The composer's natural gift for melody is everywhere apparent in these sonatas, especially when presented with such lyrical fluency as here. But there is more to these works, the range of accompanying textures, of colours and moods, which can easily be sidelines in an exclusively melodic reading. But this is where the present players really excel, creating engagement and a unique atmosphere for every section of each of the works.
Chumachenco has a rich violin tone, the best of which is in the lower register. Fortunately, Schumann regularly visits those lower registers, and the resulting warmth and intensity is satisfying indeed. There are also one or two points where the music moves to double stopping in the lower register, usually just for a note or two. Again, the sheer intensity of the timbre is wonderful, and all the more so for the composer's discretion in using the effect so infrequently. Higher up, Chumachenco diversifies his tone more. He again has a richness that he calls into play for the more sweeping melodies, but he also has a lighter, more nimble sound, which is ideal for the faster passage work.
Neither player takes the phrasing of these works for granted. Phrases and sections are often framed with slow, quiet introductions and conclusions. In lesser hands, such extreme phrasing could sound clumsy and exaggerated, but the sheer musicality of these players, combined with the rich, sustaining violin tone, ensures the credibility of every musical decision.
The ordering of the sonatas is unusual. Perhaps it is just a matter of personal taste, but to my opinion the Op.105 Sonata is the best of them, not to mention the most memorable. This combined with the fact it was the earliest written would suggest it as the ideal candidate for the opening spot. That is where you'll find it on most recordings, but it is shunted to second here.
However you organise the works, there is little doubt that the WoO2 qualifies as 'Sonata No.3' and it is duly afforded the final position on the recording. This posthumous work is the most musically diverse of the three. or so runs modern opinion. In fact, it was only first published in 1956 and has suffered from a reputation for being long and incoherent. To the credit of the present performers, there is no effort made here to rescue it from those allegations, rather they exploit the wide range of emotions and moods. Yet again, the rich violin is often the saving grace, and long melodic lines that could so easily sound rambling and directionless here become meditative and satisfyingly self-contained.
As you'd expect from MDG, the audio is to a high standard. The make of piano is not stated, but it has a fairly soft, almost 19th century, tone. Magnificently played too, Kalle Randalu managing to cleanly articulate Schumann's complex accompaniments without ever intruding too far into the foreground. Given the label's commitment to undoctored sound, this must surely be the result of the pianist's sensibility to balance rather than to any post-production manipulation.
Impressive Schumann all round then. If you've heard other recordings of these works, you may find that Chumachenco and Randalu linger more than other players. They give the impression that they are often happy just to enjoy the moment rather than worrying about large-scale structural concerns. Some may read that as a lack of structural insight. To me, though, the sheer elegance of the violin sound absolves all. Schumann's formal logic isn't up to its best in these works anyway, so why not just enjoy the many passing moments of beauty?
Gavin Dixon