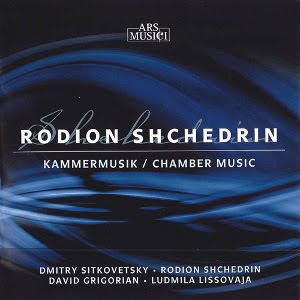 
There is a certain austerity about Shchedrin's music, especially his chamber music. It distinguishes his work from that of many of his more lyrical contemporaries, but may also have the effect of alienating listeners. It is perhaps an inheritance from Shostakovich, but it is even more intense here, creating brittle, angular sonorities, even when the music is at its most melodic.
Three of these works have explicit links with famous musicians, Menhuin, Bach and Albinez, but the connections rarely come close to the surface. True enough, the two composers are quoted, but only very briefly, and in such stylistically opposing contexts that satire or parody is suggested.
The point really is that all these works are 100% Shchedrin, and while he is a composer who makes a point of emphasising his connections with the past, he also ensures that influences are fully digested and that his authorial voice predominates.
The Mehuin-Sonata was first played by the present violinist, Dmitry Sitkovetsky, rather than by its dedicatee, although no explanation is given here as to why this was the case. And without that biographical link, it is difficult to determine exactly what the musical connections with the great violinist might be. It is a slow, measured work, with the violin playing sustained, often double-stopped sonorities throughout. There is something of the religious minimalism about it, in particular the way that everything is so defined and confident, but without being emphatic of forced. The sonata is in a single movement lasting around 20 minutes, and its form is quite inscrutable. As in so many of Shchedrin's works, there are clearly secrets below the surface, cyphers perhaps, or coded references, but they remain a mystery, to me at any rate.
“Echo-Sonate” was written in 1984 in honour of the 300th anniversary of J.S. Bach, but again the reference is opaque. There is a short quotation, or possibly allusion, towards the end of its 20 minute span, but the rest of the work inhabits the same aesthetic as the Menuhin Sonata: long, sustained notes, regular double-stopping, atonality but with regular visits to more comfortable tonal environments.
The Cello Sonata is a more traditional work in many ways. Here, Shchedrin finally allows unmediated melody to control the form. It remains atonal, or at least based very extended tonality, but in general the work is based on melodic lines, woven through the mid- to upper-register of the solo instrument. The composer accompanies, and gives a clue to the construction of his chamber music textures in the way he plays. Every accompanying figure is picked out with a spiky, angular precision. Phrases are presented as autonomous units, and the continuity of the texture is only possible due to the melodic linearity of the cello line. The work's four movement structure suggests tradition, although again traditions are invoked here rather than blindly accepted. Perhaps the most important legacy of the Classical or Romantic sonata tradition is the sheer variety in the work; the movements are clearly linked, but the variety of timbres and moods between them really stands out, especially in comparison with the more monolithic preceding works.
“Im Stile vom Albinez” is a short lollipop on the end of the programme. There are shades here of Shchedrin's famous Carmen arrangement, although the tonality is far more compromised, as are the dance rhythms on which the work is based. It calls to mind some of Schnittke's short pastiche works for violin and piano, less self-referential, but just as much fun.
Rodion Shchedrin is one of the great survivors of 20th century Russian music, a fact partly explained by the solidity of his technique and the distinctiveness of his style. There is a curious paradox in the fact that he is able to draw on so many external references, yet writes music that is seemingly unaffected by its immediate context. The music presented here dates from the 80s and the 90s, but there is no apparent distinction between his works from those two decades; the collapse of the Soviet Union seemingly an irrelevance. At the end of the day Shchedrin always sounds like Shchedrin, austere perhaps, and angular, but pithy too, without a note wasted. It's not always beautiful, but it is always interesting.
Gavin Dixon