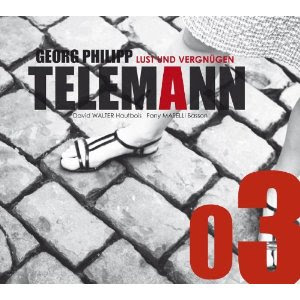 'Lust und Vergnügen' (The Pleasure and the Joy) is the third in a series of attractively packaged discs of chamber music by Telemann on the French label Hérisson. The solo instruments here are oboe and bassoon, a promising combination given the composer's predisposition towards the former and his willingness to experiment with unusual bass instruments like the latter.
The programme consists of four sonatas, two for oboe and two played on bassoon, bookended with a trio sonata and a partita. The continuo group consists of harpsichord, theorbo and cello. An intimate setting then, and the ideal environment for both solo instruments.
Oboist David Walter generally plays with a full tone, but also has a thinner, reedier sound that he reserves for the faster higher passages. Is he playing a modern instrument? The liner doesn't say one way or the other. If it is a baroque oboe, he is very reserved in his range of articulation, there is none of that sliding portamento that can be achieved with open tone holes. In fact, everything is very proper about his playing. But anything that is lost in a lack of adventurousness is more than made up for by the playful energy of his playing. He takes Telemann's notes, and indeed the title of the disc, at face value. And perhaps that is just as well, this isn't Bach after all, and could easily suffer through over interpretation.
Fany Maselli has two overlapping roles as bassoonist, both a soloist and a kind of de facto continuo player. She too I suspect plays a modern instrument, if only because of the uniformity of her tone and the precision of her intonation. At least one of her solo sonatas is an arrangement of a work for viol, which is instructive given that the speed of the music makes no concessions for her more cumbersome instrument. One or two of the runs get a little congested, but in general she demonstrates that the bassoon can be at least the equal of the oboe in this repertoire.
In the final partita, the oboe and bassoon play together as equal partners, equally matched in tone and dexterity. Even in this more contrapuntal situation, the music is still presented as light and straightforward. It is interesting how close the soloists and continuo groups come here. In the sonatas as well, it is difficult to hear this as solo music with accompaniment. Nobody really stands out, and nobody tries to. The resulting sense of equality and ensemble endears the music, each of its players contributing energy and passion, apparently unhindered by any underlying aesthetic ideology. The title is apt, this disc is a pleasure and a joy.
Gavin Dixon