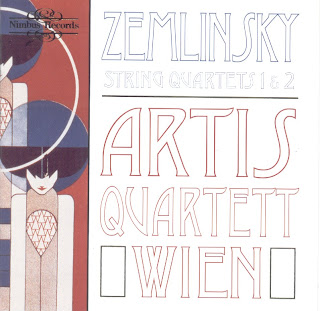 Music from transitional times can often seem like it is in a continual state of modulation. Zemlinsky deserves to be appreciated on his own terms, but it is all too easy to hear his output as a gradual move from Brahms to Schoenberg. His first two quartets demonstrate the paradox: they are both excellent and stylistically autonomous works, yet the comparison between them portrays the composer as a Brahms acolyte gradually breaking free, moving beyond strict adherence to tonality, but never renouncing it nor accepting his brother-in-law’s alternative.
The designation Opus 4 gives a slightly misleading impression of the First Quartet. True, Zemlinsky was only in his mid 20s at the time of its composition, but this is mature and consummate writing in the most demanding and expectation-ridden of genres. It is post-Brahmsian in the most literal sense. Brahms had been critical of Zemlinsky’s previous essay in the genre (a D minor quartet that only survives in fragments) and Zemlinsky had composed his Op.4 with the criticism of the earlier work’s Modernist tendencies still ringing in his ears. Brahms makes his authority felt in the formal structuring and the slightly repressed Romanticism of the melodic lines. But the textures are generally more open than those of Brahms’ chamber music. For all that, there are moments of sheer Expressionist abandon, for example the intoxicating, intertwining melodies that open the third movement.
Passions run higher in the Second Quartet. It’s a much later work, and speaks of more turbulent times in the composer’s personal life, quite a racy business which implicates a few celebrity names. The main source of Zemlinsky’s turmoil was the ending of an affair with his composition pupil Alma Schindler, who had left him in order to marry Mahler. Then there was Zemlinsky’s sister Mathilde, who was married to Schoenberg, but who had had an affair with the painter Richard Gerstl, who had then committed suicide when she returned to her husband. Schoenberg held Zemlinsky partly to blame and the incident caused irreparable damage to their friendship.
On top of all this times were changing. The Quartet was written in 1915, and Schoenberg’s radical restructuring of Brahms’ legacy in clearly evident. The work is effectively in a single 40 minute movement, although its structure is sectional, with a wide variety of moods, tempi and implicit tonalities. I say implicit, the rebellion against tonality comes through mostly as a preponderance of chromatic passing notes over otherwise stable (if wayward) key centres. The music doesn’t quite have the angst of Schoenberg; it is considerably more civilised than his Second Quartet for example, but its rhythmic and harmonic variety make for endlessly fascinating variation. If I’ve one reservation, it is that nagging suspicion that everything is transition, a historically conditioned response perhaps, but it is difficult to listen to this music without it invoking the more daring experiments of later composers, particularly Berg.
The Artis Quartet are excellent exponents of this music, bringing that authentic Viennese feel. Zemlinsky has a habit of writing extremes of dynamics and articulation, and the Artis players are right to take these with a pinch of salt. This is music that is really intended to flow – not quite stream of consciousness but approaching it – and the players help it do just that by toning down some of the more extreme disjunctures. They are quite glissando-heavy scores too, and the players strive throughout for tasteful results, usually opting for a halfway between glissando and portamento.
The packaging is also worthy of mention, with designs by Otto Wagner and a great Art Deco font on the front and back covers. All in all, this is an impressive release, with both the composer and the performers striving to create something both approachable and artistically substantial. Lovers of Second Viennese School quartets will find much here of interest. Lovers of Brahms’ chamber music need not be intimidated, there is plenty here for them too.
Gavin Dixon