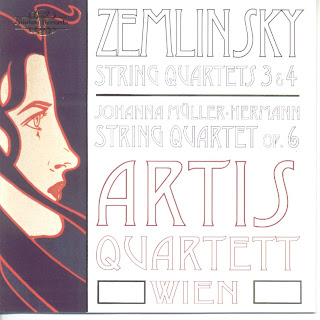 
As with volume 1 of the Artis Quartet’s survey of Zemlinsky, volume two charts times of turmoil and change. His 3rd and 4th Quartets are both considerably more post-Romantic than his 1st or 2nd, and even the stylistic progression between them is remarkable. Zemlinsky was not a particularly prodigious composer, and these are both mature works, despite their seemingly low opus numbers. And both deal with issues of grief and death.
The death in the case of the 3rd Quartet was of the composer’s sister, Mathilde. The music takes on that particularly Viennese neurosis through rapid changes of pace and focus. It’s apparently conventional four-movement structure hides a more complex micro-level of more chaotic ordering. The textures are often reduced to just a single instrument, but even then the music retains an emotional intensity. As in the earlier quartets, glissandos make regular appearances, and seem ill-matched to the otherwise very precise contrapuntal textures. And for all the chopping and changing, the music maintains a stylistic distance from the Second Viennese School. There is nothing here of Schoenberg’s klangfarbe or Webern’s concision.
Alban Berg is the closest of the serialists to this music, so it is fitting that the 4th Quartet was written in his memory. Unlike the 3rd, the 4th has a freer six-movement structure, a conscious reference no doubt to the Lyric Suite. If there is any further homage to Berg in this music, it is through the reliance on melodic flow, but stylistically that is a tenuous link. Texturally, this is the barest of Zemlinsky’s quartets. As with the 3rd, much of the music involves individual players of duets. But the difference here is that you feel the solitude. The work has all the rhythmic and melodic variety of Zemlinsky’s earlier Romanticism, but it is clearly music of a later and more desperate time.
If Johanna Müller-Hermann’s 6th Quartet sounds naive in comparison, it is not necessarily because it is the work of a lesser talent, nor that it was written by a woman (perish the thought), but rather that it was written in 1908, before the artistic and political turmoils that colour Zemlinsky’s later work. Müller-Hermann was a pupil of Zemlinsky, and like him, she was a composer who put melody first. And what magnificent melodies they are! You may think of Elgar or possibly Delius when listening to this, the way that the music conforms to the precepts of the form is closer, perhaps, to the former composer. But this is music from well within the Austro-German tradition. The fact it can conform to the requirements of that tradition without displaying any particular angst about it is little short of a miracle. Perhaps this is where the composer’s gender comes into play. This is the premiere recording of the work; it is quite a find.
The Artis Quartet again do Zemlinsky proud, and extend their passionate but precise artistry to the music of his pupil. There is a certain austerity to their playing, and if anything this is even more appropriate to Zemlinsky’s later quartets than his earlier. This isn’t Brahms after all, and the Artis Quartet locate the music squarely in the 20th century. They achieve an impressive feat, especially in the Müller-Hermann, of playing in a strict, disciplined style – narrow vibrato, and little rubato – and yet creating a sound world that is both passionate and involving. As with volume 1, I have nothing but praise for the sound quality and the packaging. I recommended that disc to adventurous Brahms fans. This one might be more for the Webern/Berg brigade, but anyone with an interest in slightly tangential string quartet repertoire should find much of interest here.
Gavin Dixon