From Advent to Reformation Day – the church calendar set to music in selected movements from the cantatas by J.S. Bach 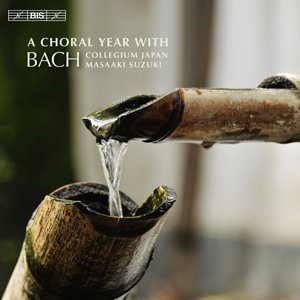 It's a bit of a guilty pleasure this one, and is definitely for those who like Bach's opening choral movements but then get distracted with he moves onto the arias and recitatives. Surprisingly, it turns out the Masaaki Suzuki shares the feeling, or at least he admits to being most attracted to the opening chorus when he is working on many of the cantatas. So that's what he has presented us with here. There is a tenuous liturgical justification, in that the choruses are ordered according to the Sundays and feast days through the year when they would originally have been sung, but otherwise all thought of devotional function is out of the window. Basically, this is a greatest hits, and why not? The number of great hits we can attribute to Bach is so high that a personal selection from one of his greatest living interpreters is surely a worthwhile project.
My first thought on reading about this release was that is was to celebrate the completion of the Bach Collegium Japan cantata cycle, but it seems they are not quite there yet. Instead, the justification is the 20th anniversary of the ensemble. Well, congratulations BCJ, the interpretation and recording of Bach's choral music has developed significantly over the last 20 years, and this ensemble has been one of the most significant influences, raising the bar even for their more seasoned European colleagues. Consistency and attention to detail have long been the watchwords of Suzuki's Bach, and they are values that pay off handsomely here. I don't think there is any other interpreter of Bach's choral music in the history of sound recording who could put out an overview of 15 years work and produce results to such a consistently high standard.
If you know Bach's cantatas well there probably won't be many surprises for you in Suzuki's favourites list. It is a nice touch to include the opening chorus from the Matthew Passion and to conclude with the Dona Nobis Pacem from the B Minor Mass, although the latter is the closest any of these movements comes to a bleeding chunk.
Speaking of favourites, mine is the chorus 'Mit Fried und Freud ich fahr dahin' from the cantata BWV 125. I think this is a seriously underrated work, but it is the ideal vehicle for Suzuki and his forces, particularly the nimble oboes of his orchestra and the sprightly men’s voices in the choir.
I've only one complaint. About halfway through the cantata cycle, BIS went over to issuing the discs as hybrid SACDs. The combination of the Japanese precision of the ensemble, the absolutely ideal acoustic of the Chapel of Kobe Shoin Ladies University and the BIS engineering have made almost all of the later releases demonstration quality SACDs, each an effective advocate for the increasingly embattled medium. But there is no SACD here, and the choruses from the later releases are presented in DDD. They still sound great of course, but just not quite as good as the originals. The irony is that on the original releases, it is the opening choruses that show off the technology to its best effect, picking out the immaculate details from the counterpoint within the orchestral and choral textures.
That apart, this is a great release – a greatest hits album with a touch of sophistication. I'm sure it is an ideal Christmas present for somebody you know.
Gavin Dixon