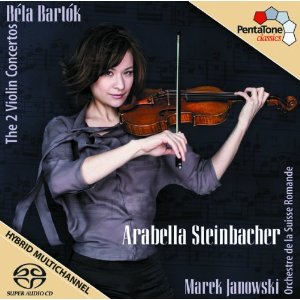 The Bartók Violin Concertos can be a bit of a balancing act. You've got to balance rustic folk charm with cosmopolitan sophistication, balance between soloist and orchestra is unusually tricky owing to the size and activity of the ensemble, and the most difficult balancing act of all is the continual need to keep all these issues precisely controlled while at the same time making the music sound fresh and spontaneous.
Arabella Steinbacher brings her innate musicality to bear on these problems, and the results are both distinctive and convincing. Her Bartók is at the more cosmopolitan end of the spectrum, and she's not one to launch into folk fiddling episodes on a whim. The sophistication of her playing is at least in part a result of her tone, which is rich and throaty and acts as a magnet to the ear. The beauty and inner complexity of her sound is endlessly fascinating. She has consistency too, of course, and the fact that her upper register is as timbrally rich as her lower is an impressive feat in itself. Her tone isn't particularly lyrical, and she doesn't really float across the top of the orchestra as other soloists might. Instead, she brings a sense of groundedness to the music, not sullen or pedantic, but rather focussed and controlled. And she is happy to move outside the comfort zone, especially with her dynamics, which regularly push both extremes, and without any ill effect to her tone.
The Orchestre de la Suisse Romande play well for Marek Janowski, they have plenty to do here and are rarely found wanting. The ensemble in the strings is occasionally a little lose, but never fatally so. The brass excel, giving some real energy to the often unusually scored tuttis. And the whole issue of balance is excellently handled. I'm tempted to put that down to the SACD technology, but equal praise should go to the recording engineers, and probably the players too. In this quality audio environment, it turns out that Bartók's orchestral textures are not as monolithic or overpowering as they can otherwise seem. The transparency afforded to the orchestral textures by the audio also has the effect of balancing the soloist with the ensemble, or rather of clarifying exactly what the relationship is at any given time. So the duets with an obbligato wind player come through as just that, the more timbrally ambiguous interplay between soloist and string section is given the required definition, yet enough ambiguity remains. And the way in which the percussion is separated from the body of the orchestral sound means that it too avoids explicit competition with the soloist.
Given the relative obscurity of Bartók's 1st Violin Concerto, it is reasonable enough that the 2nd gets top billing. But, while it is not quite in the same league as its successor, the 1st is a great piece, not juvenalia at all and distinctively Bartók in every sense. This is a great CD all round, and by the time you get to the end, you'll find yourself wanting more. Its 61 minutes running time isn't too stingy, although there is space there for at least one more work, one of the Rhapsodies perhaps. Fingers crossed they are saving those for the next disc.
Gavin Dixon