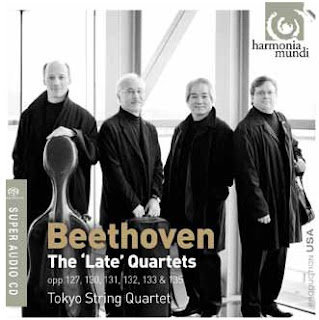 This is not the first time the Tokyo String Quartet have committed Beethoven's late works to disc, but it is the first time with the current line-up and, more significantly, is the first time on SACD. The results are both precise and passionate, with each quartet given a impassioned and intense reading. It is absorbing stuff, drawing the ear into the bizarre microcosm of each work, but the performers don't labour the strangeness of the music, opting instead for an approach driven by melody. This allows them to create impressive coherence within and between movements, even with tempos that are often on the slow side. It is not the last word on Beethoven's much-record late quartets, but the sheer integrity of the interpretation makes comparisons with other recordings seem almost redundant.
The ambiance of the recorded sound is quite unusual for high end audio, in that it favours homogeneity over precise detail. A complaint often levelled against the use of SACD for chamber music is that the sound is over-analytical, dissecting the textures in order to bring the individual details to the fore. Well, there is none of that here. Instead, the quartet are presented throughout as a single entity, producing warm, coherent sounds. This suits the Tokyo Quartet well, as this is clearly how they choose to present themselves. The sound is a little top-heavy, or at least it rarely emphasises the cello over the violins. On occasion that can make Beethoven's textures seem more conventional than they actually are, but in general it only goes to further emphasise the melodies at the top of the texture.
The ordering of the quartets follows a roughly chronological pattern. One curious programming decision is the insertion of the Grosse Fuge Op.133 before the finale of the Op.130 Quartet. This too relates to the chronology of composition, in that the Fuge was originally intended as the finale of the Op.130 Quartet, until the composer decided it's scale was excessive and replaced it with the finale we know today. So why attempt to reverse the composer's decision? The idea is clearly not new to the Tokyo Quartet, as they also presented the works in this order on their recording from the mid-1990s. But to my ear, the intrusion of this huge movement only goes to demonstrate the composer's good sense in publishing it separately.
Another problem is that the Grosse Fuge is not performed to the same standard as the rest of the quartet. In general, the Tokyo Quartet excel at the slower, legato music, but there are a number of occasions (most of which are in the Fuge) where the warm, homogeneous sound sucks the energy from the faster, contrapuntal textures. This is also the only place in the recording where the top-heavy engineering balance compromises the music, reducing the vital contribution of the cello in particular.
No such problems on disc 3, which is devoted to the Quartets Opp.132 and 135. The Tokyo Quartet leaves the best until last, and these readings really show how their approach to Beethoven can work. In lesser hands, both works can seem rambling and incoherent, but the combination of precisely integrated textures and an almost narrative approach to melody reveal an underlying logic to each. And the slow movements are just magnificent, the Molto adagio of Op.132 and the Lento assai, cantate e tranquillo of Op.135. The tempos are slow, almost infeasibility so at times, but the rich legato tone carries the music wonderfully. The results are almost symphonic, and are certainly more Romantic than many purists would sanction. But like everything here, they are interpretations that stand up well on their own terms. All round, this is an impressive set, but if you want to know what makes the Tokyo's Beethoven special, you'll find it on this last disc.
Gavin Dixon