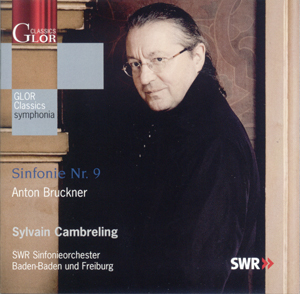 Focus is the watchword for Sylvain Cambreling’s Bruckner. This 9th is one of three recent Bruckner releases from him and the SWR Baden-Baden und Freiburg forces, the others being of the 4th and 6th Symphonies. Like those, this is a reading that emphasises precision, direction and clarity. And the rigour of his interpretations is served magnificently in each case by the quality of the orchestral playing and the fidelity of the audio.


But as in these other recordings, a lot of magic is lost through the precise tempi and continual insistence on the bigger picture. That’s a big issue in the 4th Symphony, where the ‘Romantic’ opening passage that lends the work its nickname is anything but, and the horns at the start of the scherzo wholly fail to give the required impression of distance.


It’s less of an issue with the 9th. Again the very start of the work could be more mysterious and there is a rigidity about the Adagio that won’t be everybody’s taste. But it is a work that can so easily go too far in the other direction. Focus is an important virtue, especially in the Adagio, and if Cambreling occasionally keeps too tight a control on things, I for one am ready to forgive.


Just looking at the movement timings, and comparing them to the Wand/BPO recording (RCA 82876 623 232 2 – as good a benchmark as any), Cambreling doesn’t take things particularly fast. He is a minute faster on the outer movements and a mere 7 seconds on the scherzo. Nevertheless, the music often feels very brisk, and I think the reason is a combination of these slightly faster speeds and a reluctance to indulge in undue rubato. Cambreling also refrains from holding onto the caesuras between phrases, whether it be the pregnant pauses before the climaxes kick in in the 1st movement or the moments of repose between the long string phrases in the Adagio.


And as I say, this precision of interpretation is well matched by the orchestral playing and the recording technology. Details come through that I’ve never heard before, pizzicato counterthemes in the Scherzo, for example, and the nasal sound of stopped horns in the middle of the texture. The woodwind soloists are a real strength in this orchestra, and I especially like the woody yet resonant sound of the solo clarinet. The brass is of the Central European narrow-bore variety, so the climaxes can occasionally sound abrasive and forced. I’m surprised how often Cambreling gives the brass their heads, because that’s the one aspect of this recording where he seems to lay off his tight control and leave it to the players judgement. The development section of the 1st movement in particular tends towards repeated excess. On the other hand, the balance has been finely engineered to ensure that the brass never swamps the rest of the orchestra, and even the woodwind shine through these fortissimos.


There is plenty of weight from the brass in the Scherzo, although here again the strongest quality of the music is the clarity of the string pizzicatos and the precise but characterfull playing of the woodwind. The Trio doesn’t really sing, and this is perhaps the one section of the symphony that suffers most from Cambreling’s foursquare tempos. It’s a short passage though, and hardly the emotional nucleus of the work.


That accolade goes to the Adagio, and there is a great deal of fine playing in this de facto conclusion. Cambreling finds a warmth of sound in the string section, which suddenly seems to have been missing in the previous movements, at least in retrospect. (This, incidentally, is the categorical difference between the SWR sound and the Berlin Philharmonic of the Günter Wand recording.) Then there are the Wagner tubas, all elegantly in tune and perfectly synchronised for their chorales. And that precision makes the end of this movement a real triumph. The control here is of a piece with the rest of the performance, but here comes into its own as a real strength. Cambreling, of course, is never tempted to dawdle or to draw out these final phases, and the almost devotional fidelity to the letter of the score allows Bruckner’s final utterances to sing with a profundity and almost heartbreaking simplicity. This isn’t the best Bruckner 9 on the market, but it has its moments, and the end of the Adagio is certainly one of them.