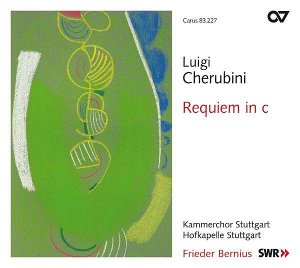 The revival of Cherubini's first Requiem is strange tale. It was popular in the composer's lifetime, but had fallen into almost complete neglect by the end of the 19th century. The cult of Beethoven later changed its fortunes, for it was apparently one of his favourite works. He considered it superior to Mozart's, and in the absence of a setting of his own, it was performed at his funeral.
So what did Beethoven see in it? It certainly has all the solemnity of his Missa Solemnis, but it is a far more straightforward work, and the choral counterpoint in particular lacks the sophistication of anything from Beethoven's mature output. On the other hand, it is an elegantly liturgical setting, and at a time when masses were becoming more and more grandiose, a Requiem that is clearly intended for church use probably seemed like a breath of fresh air.
Beethoven's commendation also seems strange in the context of the cultural politics of the years after his death. Berlioz tells us (although he of course had his own agenda) that Paris was particularly resistant to Beethoven's music, preferring instead the works of émigré Italian composers, the most prominent of which was Cherubini. Even today the idea of a German ensemble performing Italian/French repertoire seems curious. Having said that, the Carus label have produced many such recordings in recent years, and the French repertoire has unquestionably benefited from the attentions of this and other professional German choirs.
Both the performance and the recording here are excellent. The setting is a small church with the ideal acoustic for the chamber choir and period instrument ensemble. The SACD sound is clear without being overly analytic. Would Cherubini's counterpoint sound more sophisticated with closer miking? I doubt it to be honest, and anyway, his most effective textures involve homogeneous choir chords with running string quaver accompaniments, and they all come across beautifully. Another choir, the Schola Gregoriana Tübingen, are drafted in for the Tractus, an extended plainsong section; an elegant if slightly over-long addition.
Then comes the Sequentia, where Cherubini gives us tam tam, trumpet fanfares, all sorts. It sounds a little staid by comparison with some of the Requiems (Requia?) of the second half of the 19th century, but I'll bet it made an impact in 1816.
Great as this recording is, I can't help hearing it as a missed opportunity. This isn't the first recording of the work on SACD, and it is not the sort of piece that naturally shows off the technology. Nor does it show the period instruments to their full potential. I was impressed with the precise intonation of the vibrato-less strings, and there are a number of moments for the bassoons to shine (which they do make the most of) but that's about it.
Then there is the running time: 46:12. That really isn't much for a full price SACD, and the number of possible couplings is endless. How about Cherubini's 2nd Requiem? Perhaps that is a bit long, but a more manageable alternative would be the funeral march and In Paradisum motet that the composer appended to the score in 1820. The former of which would surely give the orchestra something more to do.
Economics aside, perhaps that sense of being short changed reflects well on the performance. As I say, the music is certainly well served, and if Cherubini's Requiem is shorter than most, perhaps that isn't the fault of the record label. Maybe the idea is to always leave the audience wanting more. Well, it's good and I do want more. Much, much more.
Gavin Dixon