Kancheli Themes from the Songbook 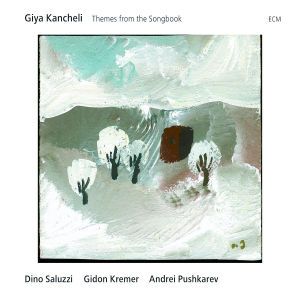 This disc is such a personal and intimate recording project, it almost feels like voyeurism to be listening to it from outside the close group of friends involved in its creation. The recording was a surprise 75th birthday present for the composer, organised by his son Sandro and producer Manfred Eicher. The musical material is taken from an album of piano arrangements made by the composer of his earlier film music. They are arranged for bandoneon, vibraphone and violin and performed by Dino Saluzzi, Andrei Pushkarev and Gidon Kremer.
The history of the sessions and mixing is equally contrived. Saluzzi and Pushkarev laid down some tracks together in Oslo. Later, Saluzzi and Kremer recorded more tracks in Riga and also overdubbed some of the recordings made in Oslo. Finally, the tapes (do they still use tapes?) were edited together in Munich by the skilled team at ECM.
Given all this globe trotting, the results are surprisingly coherent. The bandoneon forms the basis of most of the textures, and Saluzzi has a wonderfully laid back approach to the music, most of which is similarly atmospheric and relaxed. The notes on the page may of Georgian origin, but this is nevertheless authentic Argentinian bandoneon playing. It is a refreshing change to hear the instrument playing something other than Piazzolla tangos, although like them, these tracks demonstrate the impressive timbral variety that the instrument is capable of.
The vibraphone playing of Andei Pushkarev is stylistically astute and the way the instrument blends with the bandoneon is a real surprise. Given the history of this recording, I suspect that some of the vibraphone playing is overdubbed. Of course, it is not the sort of instrument to create overly dense textures, so even when we are hearing it accompanying itself, the results are always very discreet.
One thing this recording is not is a comprehensive survey of Kancheli's work for film. The selection process, by the composer and possibly by the players too, emphasises the quiet, the relaxed and the atmospheric. Given the range of moods required from the soundtrack to almost any film, Kancheli must have spent a good deal of his time in the past writing more upbeat music than this. We don't associate it with him though, so it would be interesting to know what it sounds like. A project for another album perhaps.
Another thing that this album is not is a Gidon Kremer showcase. He only makes a few appearances, all of which are of course immaculate, but I think his many fans may be disappointed if they buy the disc just to hear him. Having said that, his contribution is both distinctive and impressive. In general, his role is to play high, delicate figures over the steady and continuous bandoneon textures. This obliges him to put more edge onto his tone than usual, simply for the sake of contrast.
Kremer's contribution, like everything else on this disc, is simple but effective. The music is relaxed but not really minimalist as such. The film music origins are clear even if the nationality of the composer is not. I continually found myself thinking back to images from French cinema of the 50s and 60s.
I hope Kancheli enjoys his birthday present. The liner note by his son implies that he still didn't know anything about it, even as the discs were being pressed. This isn't typical Kancheli, by any means, but then the creative contribution of the other musicians involved, and even of the producer, seem to be just as significant in determining the result. I wonder what surprises ECM have up their sleeve for his 80th.
Gavin Dixon