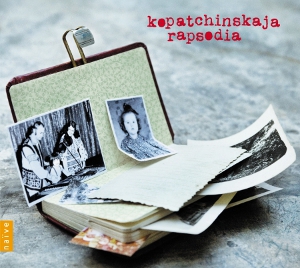 It is a classic recording industry tale: a young soloist signs to a big label, releases a recording of a famous concerto, and when that shows healthy sales she is let lose on a more esoteric pet project. In fact, it wasn't just Particia Kopatchinskaja's Beethoven that sold well for Naïve. She previously recorded a new concerto by Fazil Say, which was also a commercial success, so the label's confidence in their young star is evidently justified.
This project is something different: folk music from Moldova. But it is not the result of an eccentric whim, quite the opposite. For this is the music of Kopatchinskaja's youth. Her parents are both folk musicians, and both feature prominently on the disc, very prominently in the case of her father Viktor, whose cimbalom provides the defining timbre to many of the works. Or perhaps that is just unfamiliarity on my part, the other instruments being the more familiar violin, viola, double bass and piano. The cimbalom has quite a biting timbre, but the sheer variety of colours and textures it can produce in such expert hands fully justifies the quantity of exposure here. More often than not it is cast as accompaniment to the violin, a task Kopatchinsky executes with a level of grace and subtly that you would rarely associate with the instrument.
The repertoire mixes folk tunes with works of classical composers steeped in the musical traditions of the area. The contrast between the two can be quite extreme, and the sheer energy of the genuine folk tunes is rarely matched by the notated works. There is a curiously American feel about many of the tunes, the opening 'ciocârlia', for example sounds a lot like a hoe down – some common ancestry perhaps?
The composers represented are a diverse group. Enescu is the most conservative of them, which is saying something. His 3rd Violin Sonata is about the most civilised of the folk-inspired works on the disc. The Ligeti duo is a very early work, and there is little here for fans of the composer's mature music. The Kurtág, by contrast, is a real masterpiece, one of those collections of tiny, brittle musical fragments for which he is known. Avant-garde cimbalom music is something of a rarity, to say the least, so the idiomatic use of the instrument here is all the more impressive. The subtlety of the cimbalom writing also comes as a surprise, and most of it is in the quieter dynamics where the instrument takes on a round, warm sonority. Kopatchinskaja confesses in the liner notes that Kurtág listened to this recording and didn't like it, too slow apparently. She is unrepentant though, and I'd certainly agree that her interpretation is eminently defencible.
Ravel seems slightly out of place in this programme, but he is another composer whose intentions are liberally interpreted. Specifically, the piano part to his 'Tzigane' which is meant to imitate a cimbalom. No prizes for guessing the twist here, although yet again the subtly of the cimablom playing is the most remarkable part of the result. At the other end of the aesthetic spectrum we have 'Crin' by Jorge Sanchez-Chiong, a work for solo violin with a range of vocal effects from the player. It's good fun, sort of Cathy Berberian mixed with a folk fiddle, and the extended techniques on the violin are as exotic as the vocal sounds.
Particia Kopatchinskaja seems to have found the ideal relationship with her record label Naïve. I can't imagine this will sell as well as her Beethoven Concerto, especially given the near universal praise that previous recording received. But this other side of her musical personality is at least as interesting, and her skill as a musician is just as evident here. It is the sort of disc that only usually gets modest distribution among specialists, so here's hoping that the backing of a reasonably large industry player can find it the audience it deserves.
Gavin Dixon