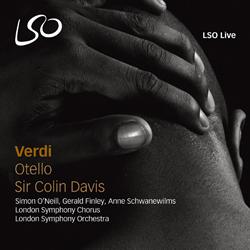 The LSO label goes from strength to strength. Their 10th anniversary catalogue lists dozens of discs, many, in fact most, of which have met critical acclaim on their release. Despite the number of releases, the label has managed to maintain a strong corporate identity, mainly by recording only a handful of conductors – Gergiev, Davis and a few guests – and by linking almost every release with a long-running theme.
After Gergiev's Mahler cycle, the most interesting of those themes is probably Colin Davis' opera performances. He is not a stranger to the microphone, but even so, these recordings are valuable documents of the work of a fine opera conductor. On the strength of this recording, I'm happy to say that he still has all the energy and insight needed to produce powerful performances, but he can't go on forever, and I suspect we will be looking back at these LSO Live discs in years to come with a sense of fond nostalgia.
For now though, jealousy, doubt and betrayal are the main topics that spring to mind when listening to this Otello. Both the performance and the recording are very fine, and I have no hesitation in recommending the discs highly. But before you run out and buy it, it is probably worth knowing what you are getting. This is a live recording of a concert performance, after all, a concept at least two steps removed from the experience of actually seeing the work on the stage.
If anything is missing, it is a sense of dramatic urgency and focus. From what I can tell, the singers did not move around the stage very much, so the recording environment is essentially static. True, the off-stage brass are clearly off-stage, but otherwise this is a straight presentation of the notes in the score, without any effort to emulate the stage action through the audio.
The balance between orchestra, choir and soloists is not what you expect from an opera house. Predictably, the orchestra are the main winners, but given the standard of the orchestral playing, it seems churlish to complain. The woodwind and brass are on top form, and each of their many appearances is a real joy. The LSO Chorus are certainly a formidable presence in the mix. Using a large amateur choir in the place of a smaller professional ensemble is another distinction between this and an opera house recording. They are perhaps a little less disciplined than an opera chorus, but that isn't really a problem here. They bring a real passion to the music, a turbulence that restores some of the drama to the work.
Simon O'Neill is a real asset to the LSO, as is demonstrated by his repeated appearances with the ensemble. Incredibly, he performs the title role of Otello here as a stand-in for the indisposed Torsten Kerl. O'Neill's projection is phenomenal, and the power he can give to his upper register is staggering. His ideal range is perhaps a little higher than that of this role, and he doesn't quite have the authority of tone in the lower register. And were this a staged performance, he would surely have worked more on the vocal characterisation. But the dramatic deficiencies of this recording are not down to him, and the sheer finesse of his singing more than makes up for any lack of credibility.
No such problems with Gerald Finley as Jago. This one is a rendition for the stage, a real embodiment of the part. Finley has a wide range of timbres to bring to the role. His singing is not always pretty but it is always precise, and always focusses intently on the dramatic situation. Anne Schwanewilms is another singer who has clearly played her role before on the stage. Her Desdemona is an emotional roller-coaster. Technically, she is sometimes a little insecure at the top, but that only adds to her apparent vulnerability.
The SACD sound does justice to all of these great performances. They have managed somehow to get round the deadening effect of the Barbican Hall acoustic, and the sound here is markedly brighter and clearer than in some of their earlier releases. Perhaps some digital alchemy has been invoked, but if so it is fully vindicated by the results. All round this is a great recording. It gives a rendition of Otello that wholly disregards the works stage drama, and you might find that slightly irresponsible. But if you are happy to treat the piece as a self-sufficient musical entity, this recording is well worth hearing.
Gavin Dixon