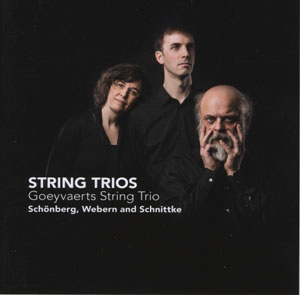 What a great cover! In these days of bland, inoffensive cover art, it is great to see something that really jumps out at you. The ghoulish face is that of viola player Kris Matthynssens, who is clearly an asset for a group specialising in the more ghoulish of the chamber music repertoire, that of the late Expressionist and early Modernist early 20th century.
In fact, the cover image gives a good idea of the approach that the Goeyvaerts String Trio takes to the music of the Second Viennese School, for these are austere performances, angular and precise, and with the music's expressive capabilities always kept firmly at arm's length. That approach is ideal for the Webern, but both the Schoenberg and the Schnittke suffer, or at least become harder to access as a listener. None of the composers here, not even Webern, was a Modernist to the exclusion of every other musical aesthetic, but listening to this, you could mistake each of them for a fundamentalist.
The Schoenberg Trio is the main work on the disc, or at least it is historically the most significant. It is the great masterpiece of the composer's later years, and as such it deserves wider dissemination. Written during his recovery from a heart attack, the work is multifarious and episodic, darting off in a different direction seemingly every few seconds. This performance captures that sense of nervous, questing energy. What it doesn't do is linger in the strange and diverse musical environments that Schoenberg visits, if only in passing. Like the composer himself, they are always thinking about the next destination. The energy that this approach generates is addictive, and from the listener's perspective a welcome counterweight to the anti-Romantic austerity that otherwise characterises the performance.
There is a delicacy about the playing of the two Webern works that is all too lacking from the Schoenberg and the Schnittke. As I say, these are the most successful of the performances of the disc, the rigour of the players' approach aligning closely with that of Webern's musical outlook. The sheer precision of the playing is palpable, the concentration on detail impressively conveying the composer's conviction that every note matters.
Schnittke's String Trio may seem like the odd one out in the programme, but actually it is a passable surrogate for a contribution from Alban Berg. For many, in Russia at least, Schnittke was the heir to Berg's art, and the String Trio is among his most Bergian creations, consciously so as it turns out, as it was written to commemorate the older composer's 100th anniversary. Having said that, you wouldn’t mistake it for Berg, it is too melodic, too tonal (if only transiently so), and too self-referentially post-modern. That last word evidently does not figure in the Goeyvaerts String Trio's musical vocabulary, and they choose instead to play the piece straight, as if it was by Berg.
The performance is not without nuance, liberal rubato for example is used to shape the phrases, but it lacks warmth. Of all the composer's represented, Schnittke is the one who really requires both a Romantic and a Modern sensibility, and this reading leans almost exclusively towards the latter. On the other hand, Schnittke writes music that demands interpretation, and the broader the range of interpretations available on record, the better it is represented. The Goeyvearts give us Schnittke the Modernist, which makes a refreshing change from the many, many recordings of this and other works from performers who are determined to cast him exclusively as a Romantic.
Like the interpretations, the recorded sound is on the austere side. The miking is close, giving a sense of involvement but little atmosphere. The balance is curiously top-heavy, a problem rarely associated with string trios. But again like the performance, the priorities for the audio appear to be precision and detail. Those weren't the only musical priorities for the composers of the Second Viennese School, but they were towards the top of the list.
Gavin Dixon