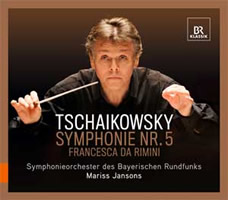 Is there some sort of Mariss Jansons cult going on in Munich? I only ask because the number of photographs of the conductor on this disc seems extreme to say the least, if you count the duplication on the card sleeve there are seven. He's in a variety of poses and they are all about as cheesy as the one on the front cover.
But listening to this disc, it is easy to hear why the Bavarians value his talents. This is a very impressive Tchaikovsky 5, and every detail of the interpretation speaks of fastidious preparation, as well as of phenomenal talent on the parts of conductor, orchestra and recording team alike.
It's all about atmosphere, which is probably the right way to approach Tchaikovsky, his music has thematic rigour and intellectual structure, but really it lives for the moment, and the greatest performances, at least of his symphonies, are the ones that keep the listener focussed intently on the continuous present. Even the long build-ups are here as impressive for the internal structure of the orchestral sound as they are for their preparation of the climaxes.
The opening chords tell you what kind of a performance we are in for. The clarinets and lower strings play quietly but with absolute focus of tone and ensemble. The acoustic of the Philharmonie am Gasteig imbues each of the chords with a warm aura and the whole thing is picked up with immaculate clarity for the SACD sound. As the symphony progresses, it is these quiet interludes that impress most. Tchaikovsky is always on his way somewhere, so most of them are preparing for something louder, and although Jansons never takes the structural side of things too seriously, nor does he forget all about it. In fact, many of these slow passages are faster than you will hear on other recordings, but they never feel fast; the increase in speed has the effect of increasing the focus, but never disturbs the absorbing atmosphere.
The tuttis and louder sections don't come across quite as well. The audio doesn't distinguish the individual instruments quite as well as it might (by SACD standards I mean, compared to early digital recordings these tuttis are excellent). I'm not too keen on the central European brass sound, although technically I'll concede that the brass playing is virtually flawless, but the trombones in particular can be very nasal and raspy. The bass trombone solos in the second movement can sound sharp, but on closer listening it turns out to just be the timbre. No such complaints about the horn solo however, which is as good as you'll find anywhere, and the piano string chords under it are a real joy on SACD.
Jansons has a slight tendency to lose the momentum at crucial points. The climax of the second movement, for example, or the coda of the finale, after the false ending. A whole generation of conductors have seen it as their obligation to follow Mravinsky in these passages and make them as dramatic as possible, but not Jansons, he's happy to let things flow. Similarly in Francesca di Rimini, a work most conductors would milk for all the inferno imagery it's worth. But again, Jansons is more interested in quieter textures, the woodwind solos and the various accompaniments from the lower strings.
Perhaps Mariss Janssons' god-like status in Munich is based on his refusal to take anything for granted, musically speaking. As his previous recordings on the BR Klassik label have demonstrated, and I'm thinking particularly of his Mahler 7, he is determined to find something new in every repertory score he approaches. That's a laudable aim, and while his priorities with Tchaikovsky are clearly different to those of many conductors, the validity of his interpretation is never in doubt. A beautifully played, expertly recorded and fascinatingly conducted disc. Jansons' Munich fans are in for a treat.
Gavin Dixon