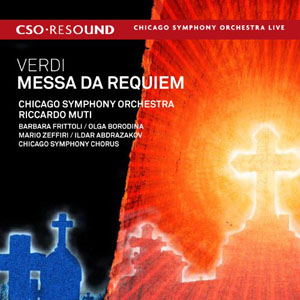 This recording marks the start of Riccardo Muti's tenure with the Chicago Symphony. It is also his first appearance on the orchestra's own label. Given the reputations of the conductor, the orchestra, and even the label itself, expectations run high are not disappointed. This is as good a Verdi Requiem as you'll find anywhere on disc. It is a distinctive interpretation as well, the work of a conductor who is clearly intent on stamping his identity on his new ensemble.
The Requiem and Kyrie movements are a notch faster than most on record, but there is plenty of ebb and flow here, and the sheer lyricism that Muti draws from the orchestra ensures that the music never sounds rushed. He is keenly aware of the operatic connotations of Verdi's setting, and many of the movements – the Lacrimosa in particular – almost sound as if they have been transplanted straight from an opera house recording.
The soloists are all excellent. Tenor Mario Zeffiri has the edge on his collegues, by virtue of the natural link he makes between the text and the phraing of the music. Ildar Abdrazokov is a steady and powerful bass presence, while Olga Borodina is a surprisingly muscular, almost manly, mezzo. Barbara Frittoli is put through her paces with the soprano part. Her voice has all the support it needs for the louder sections, but comes into its own in the high, quiet music, where an apparent frailty appears in her tone, the result, I think, of a very finely controlled and narrow vibrato. The human dimension of these solos is the ideal counter to the bombast for which the work is better known. There are one or two points where the ensemble between the soloists is slightly awry, but that's a very small grumble for a performance that is otherwise technically spotless.
The orchestra are on top form, good ensemble from the strings and emotive solos from the woodwind. But it is the brass who steal the show, the section showing just why they are held in such esteem around the world. The lower brass has power and clarity, the trumpets are bright and crisp, and the horns can cut through any tutti texture without the volume adversely affecting their tone.
The Chicago Symphony Chorus are appropriately apocalyptic where required. In terms of tuning and ensemble, you can't expect miracles from a choir of this size, but like the orchestra, they prove impressively skilled at maintaining their tone even in the loudest excesses of the Tuba Mirum.
Congratulations to CSO Resound for their recent (and perhaps slightly belated) adoption of SACD. The quality of the recorded sound here ought to persuade any lingering doubters that it is worth the effort. A little of the detail is lost in the full tuttis, but the compensation is an impressive balance right across the orchestra's range. And in the quieter movements on the second disc, the crystal clarity of the sound is excellent, and really does justice to both the soloists and the woodwind section.
Given the number of Verdi Requiems (Requia?) on the market, this could seem like a dangerous gamble by the CSO. Their marketing approach is presumably based on the reputations of the performers involved. I'm happy to report that conductor, soloists and orchestra alike all put in performances to be proud of. This is clearly the beginning of an exciting new era of music making in Chicago. Here's hoping that enough of the CSO/Muti performances make in onto record for us to keep up on this side of the pond.
Gavin Dixon