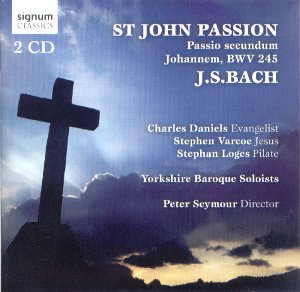 For many people, the words 'Bach' and 'Yorkshire' used in the same sentence evoke images huge choral societies performing the B Minor Mass and the Passions at a dirge pace and accompanied by a full symphony orchestra. But, of course, Yorkshire is also the home of the York Early Music Festival, of the excellent York University Music Department, and of the Yorkshire Baroque Soloists. Judging by the number of London-based players in the orchestra, I'm assuming the Yorkshire Baroque Soloists is a professional part-time ensemble. I suspect there is some institutional link with York University, where this was recorded and where all of the soloists seem to have studied, but the liner doesn't go into details.
Their St John Passion is an impressive recording. Orchestra, choir and soloists all deliver secure performances, and there are some moments of real beauty. In terms of performance conventions, we are looking at a period instrument orchestra of 14, a choir of 20 and three soloists, with smaller parts taken by singers from the choir. The pitch is A=415hz and the continuo organ is tuned to Valotti temperament. Tempos are in the range of moderate to brisk, but there are no radically fast choruses. The continuo accompaniment is solid and largely undecorated.
The opening chorus, which is really the only chorus in the work, puts the performers through their paces. Both choir and orchestra come through clearly in the audio, with plenty of detail if perhaps a slight lack of presence. The balance of the choir is good, although the tenors struggle a little to compete. In the orchestra, the ensemble of the strings is excellent, but woodwind are the real stars, their individual woody colours mingling beautifully in the introductions and obbligato accompaniments.
Elsewhere, the choir excel in their hushed chorales, which are low key without being unduly restrained – simple but effective. The soloists are an ideal combination, their voices distinctive but complimenting each other well. Stephen Logue comes close to stealing the show as Pilate, and the sweetness of his tone in the upper register suggests his potential is not limited to bass roles. Charles Daniels is suitably declamatory as the Evangelist, a little more tone in his recitatives might be nice, but not if it is at the expense of his exemplary diction.
All round then, an impressive John Passion. In the grand scheme of things, it may seem a little unadventurous for being middle-of-the-round, interpretively speaking. But this is a performance that takes on board many lessons from the history of the period performance movement (with the notable exception of those from Joshua Rifkin). It has plenty of life and never goes to excesses of tempo or dynamics to make its point. And it doesn't force any more drama on the work than it can handle. A coherent, articulate and engaging performance that balances well the work's twin identities as narrative and contemplation.
Gavin Dixon