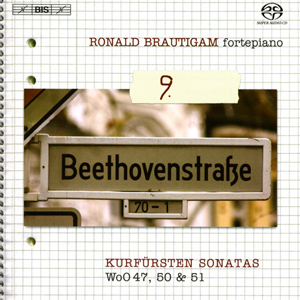 Ronald Brautigam could easily have overlooked these early unpublished works in his survey of Beethoven's piano music, but his fans will be grateful that he didn't. It's not the greatest music in the world, but that hasn't stopped the pianist preparing and presenting the works with the same level of care and dedication that he brings to the mature music. And the high-end audio is put to good use reproducing the nuanced textures of the fortepiano.
The three 'Kurfürsten Sonatas' are the main offering here. The musical language of each of them is well within the rigorous formulaic conventions of the late 18th century, so if continual use of Alberti bass and whimsical cadential ornaments makes your teeth grate, this might not be for you. On the other hand, the sheer life the Brautigam brings to this music transcends all the conventions. He finds wonderful humour in many of the movements, as if they were the work of a younger and less selfconscious Haydn.
The dynamic range that the fortepiano offers is surprising. Sure, it doesn't have the very loudest sonorities of a modern grand, but it has just about everything else. Brautigam really makes the most of these dynamic possibilities, often articulating the structure of a movement through the subtlest of gradations in crescendos or answering phrases. The bass end of the instrument is a little boxy, as you might expect, but Beethoven never demands more from his left hand figurations than the instrument can deliver. And again the high quality audio ensures that nothing in the middle or bass register is every obscured.
The 'Zwei Sätze einer Sonatine' may be familiar to former piano students, who'll have come across them at about the grade 6 level. I did myself, but they never sounded like this when I played them. Brautigam again delivers a performance filled with bounce and vitality. So too in the '2 Leichte Sonatinen' and the 'Zwei Stücke für Klavier (Orphika)'. The justification for skipping these last two works in a Beethoven piano survey is even stronger, the former are only tentatively attributed to the composer, while the later was written for a completely different instrument. (The orphica was apparently a kind of small spinet.) Again, the performances are first rate. The music of these fragments and short movements is slightly more liberated from the stylistic conventions, at least in terms of texture, which ranges from the monophonic to the heavily chordal. There are no memorable melodies to speak of though, and it is easy to find yourself marvelling at the sound of the instrument and forgetting all about what is being played on it.
And you really can't forget that this is a fortepiano. The sound is as civilised as you could hope from such an instrument, but it still has a certain rustic colour. Brautigam is conservative with his pedalling, or rather with his kneeing, as he is using a sustaining knee lever under the keyboard. But even with more knee, I suspect the instrument would produce a fairly dry sound. Fortunately, it is in the safe hands of the BIS engineers, who by volume 9 of this project have really mastered the instrument's recording potential. In lesser hands, the sound could seem distant and uninvolving, but here the fortepiano has a real presence. It's almost like having the instrument in front of you. Repertoire-wise, this wouldn't be my first choice from the Brautigam Beethoven cycle, but in terms of performance and recording it is the equal of any of its predecessors.
Gavin Dixon