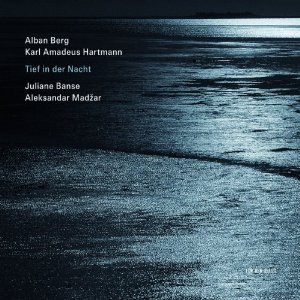 
Juliane Banse has the ideal voice for Berg. She has the power and range of a soprano, but the richness and depth of an alto. Her vibrato is pronounced, but always very focussed and controlled. Most importantly of all, she sings with an intense expressivity which imparts depth and feeling into every phrase. From a lesser singer, these songs could sound like mere juvenilia, but Banse demonstrates that they are the work of a sophisticated and fully developed musical personality.
Chronologically though, they are early works. Most of the songs here date from the first decade of the 20th century. Technically then, the music is still tonal, but everything here is forward looking. This is most evident in the lack of formal certainties; each song has a specific mood and pace, but there is no feeling of constraint from either the tonality or the form. The music floats and twists, dictated only by the expressive demands of the poet and the composer.
Berg's early songs cover quite a range of poets, and you'll hear, amongst others on this disc, Nikolaus Lenau, Goethe, Altenberg and Theodor Strom. If, like me, your German isn't quite up to this meaty fare, you'll need to refer to the excellently translated lyrics in the liner. However, if you can cope with the German, you will have no trouble in picking out every single word, such is the clarity of Banse's diction.
The Berg portion of the programme concludes with two settings of Theodor Strom's 'Schliesse mir die Augen beide' dating from 1907 and 1925 respectively. The two tiny works (each is just over a minute) make a fascinating comparison. The latter setting demonstrates what happens to Berg's music when the already arbitrary framework of tonality is replaced with the equally arbitrary (at least to Berg's music) system of serialism. The similarities between the two works outweigh the differences, and it is almost as if Berg is resisting the formalising tendencies of serialism in 1925 almost as hard as he had been those of tonality in 1907.
The three Hartmann songs that complete the programme fit well, but are clearly the music of a different composer and a different age. That said, they were originally part of a cantata (called 'Lamento') that was written in memory of Alban Berg. But Hartmann is a more down to earth composer. His phrasing is more four-square and his harmonies are more traditional. It is still great music though and it shows off another aspect of Banse's art, in particular her ability to sing in a robust, declamatory style while still retaining all the warmth and humanity that makes her Berg so special.
Alexander Madžar provides the ideal accompaniment. Like Banse, he combines impressive technical control with the exceptional freedom of expression. Hartmann gives him more notes, both in terms of more heavily voiced chords and contrapuntal textures beneath the voice. But here too he retains a valuable sense of lightness.
As ever from ECM, the recording quality is good, providing a vibrant and involving soundscape, and the packaging is excellent. The performers and the label have struck a rich seam with this early 20th century lieder. There is plenty more of it out there that could work wonders, I'm thinking of Zemlinsky perhaps, or Schreker, not to mention Webern. All could benefit as much as Berg and Hartmann have from the attentions of these fine performers.
Gavin Dixon